Jongleurs assisted minstrels and troubadours in their singing performances. Though they were skilled in so many areas such as acrobatics, dancing, juggling, poem recitation and jesting, Jongleurs were mostly nomadic entertainers who roamed from one place to another. This reputation became a cause for distrust. People considered them as vagabonds and Jongleurs were unlikely to make a decent living.

Jongleurs plied their trade in public places like markets, abbeys and castles owned by aristocrats, who sometimes employed them permanently and promoted them to minstrels. Jongleurs who became minstrels devoted their time to singing ballads and composing their own medieval music and poetry rather than to general entertainment.

Although not as prominent as minstrels or troubadours, Jongleurs were all-around entertainers. They possessed a wide array of skills besides singing songs. Jongleurs dabbled with all kinds of music so a number of them were well-versed in playing a variety of stringed medieval instruments such as the Lute, Vielle, Harp, Psaltery, Fiddle, Gittern, Symphony, Organistrum and Rote), wind (e.g. Pipe, Tabor, Bagpipe and Panpipes) and key instruments (e.g. Organ and Clavichord). 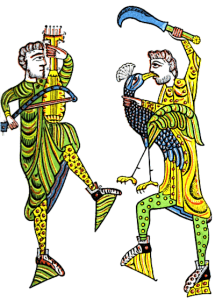 Jongleurs medieval musicians and entertainers from the 11th-century medieval times

Jongleurs were either court attendants or individual travellers who sang verses and performed various acts including juggling, jesting and conjuring to amuse all kinds of audience. In most cases, jongleurs were the assistants and collaborators of minstrels or troubadours.Jongluer is the French word for juggler.

Jongleurs lacked the refinement of troubadours or the specialized expertise of minstrels so they were not limited to particular types of music and had to perform other acts in between singing. Since Jongleurs were also in the business of singing songs to please women, courtly love ballads were likely to be part of their musical repertoire as well as songs of heroic conquests. In addition singing, Jongleurs could do acrobatics, eat fire, dance, juggle, recite poems, perform acts of buffoonery and trained animals like dogs and monkeys.

The jongleurs were not as adept at literary composition as minstrels and troubadours so they settled for reciting literary works like the chansons de geste, lays, the fabliaux (humourous French poems) and metrical romances that at times, they themselves composed. Jongleurs did not limit their song coverage for the sake of entertainment.

Decline of the Medieval Jongleur

Puys were jongleur communities that regularly held competitions for lyric poetry. Jongleurs interested in competing were encouraged to join puys. The jongleurs’ presence in Medieval society declined much earlier than the minstrels. While they were at the pinnacle of importance in the 13th century, they disintegrated in the 14th century and their various roles broke into several individual performances – some became musicians and others concentrated on acrobatics and so on.