The helmet, shield, and body tunic made of mail all originated from ancient times 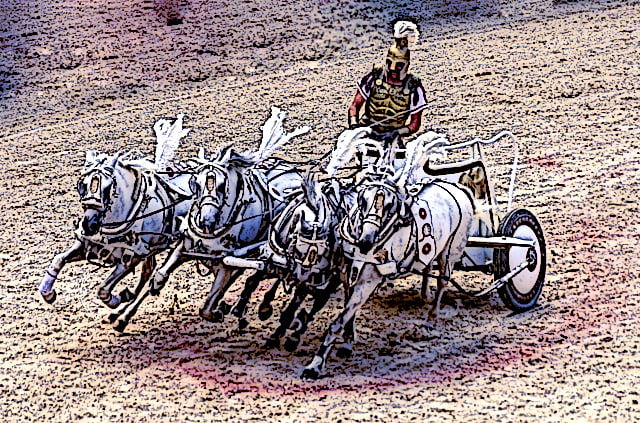 Early armor and shields were usually made from leather and wood it was not until later medieval periods in all the major advancements of medieval armor took place.

Armorers became more advanced and new methods of production developed, lighter more flexible steel allowed the manufacture of flexible plates for different body parts that could be riveted together to form a suit of armor. 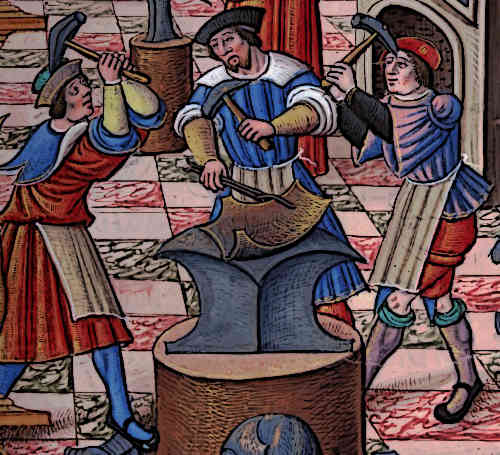 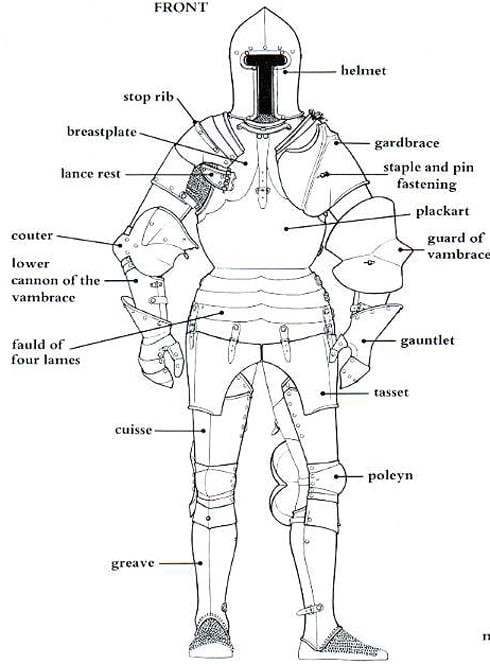 A knight in medieval times would not last long in battle without any plate armor due to the advancement in weaponry that was made in later medieval periods.

In this respect, there was no option for a knight but to wear full plate armor in battle situations especially in the later medieval periods – without full plate armor knights would be quickly killed by footsoldiers such as crossbowmen * longbowmen. 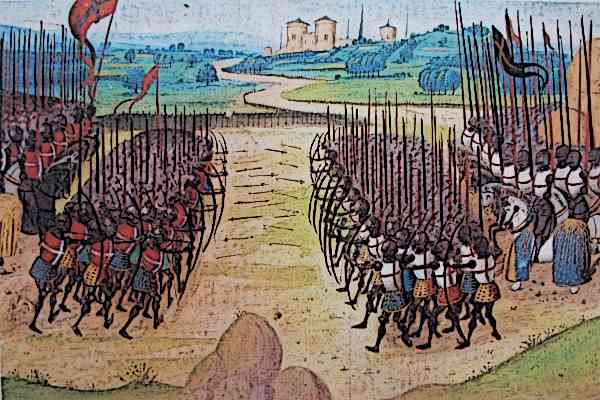 There was a need for an improvement in medieval armor and from around the 14th-century steel plates were added to the chainmail for additional protection. 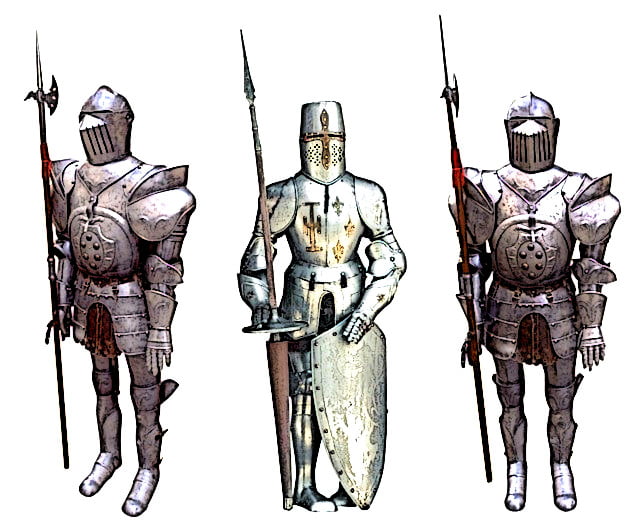 towards the end of the middle ages, knights were wearing full plate armor suits which were made from overlapping steel plates, these better protected Medieval Knights’ attacks from most medieval weapons.

There were still vulnerable parts as there were gaps in the armor that a sword could be thrust into or that arrow could penetrate, so even full plate armor was not perfect but it did make medieval knights more formidable.

How did a Knight wear his Armour?

A medieval Knight would need help putting on his plate armor which was time-consuming so a knight had to be prepared well before the start of a battle, the armor also had to be put on in sequence so that the knight was properly protected.

When the plate armor was put on it was surprisingly easy to move around in and medieval knights could actually run or mount a horse unaided!

Medieval armor was made more comfortable by the use of padded undergarments worn underneath for extra comfort. The joints at the arms and legs of the full plate army were designed to be flexible allowing for a reasonable amount of movement

How was Full Plate Armour Made?

Very wealthy Knights could select high-quality armor that was specially made for them, and there was also a demand for fashionable plate armor.

Wealthy Knights could also have highly decorated and engraved plate armor and it would also be a good decision to make the design of the helmet look as fearsome as possible. There were many options available during the medieval period for plate armor as long as you were wealthy.

This was a part of plate armor that protected the thigh area, there was also an obvious need to create armor for the bend in the knee and a guard or poleyn was added to the Cruisse that allowed flexibility in this area. 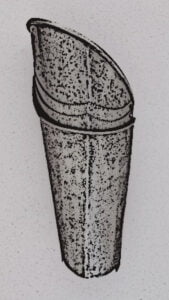 This plate armor part was designed to protect the hand as it was one of the most vulnerable parts of a knight’s body, however knights needed flexibility in finger joints to be able to grasp their heavy weapons, therefore six or seven tiny plates covered the finger and were added to the Gaunlet and multiple plates were also added around the wrist area to allow good movement of the wrists. 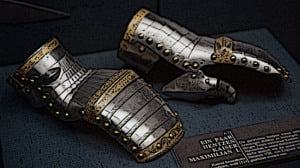 The foot was also a very vulnerable part of a knight’s body as medieval weapons could easily crush the fragile bones of the Foot.

The Sabaton was made using a series of multiple plates joined together that offered some flexibility in the foot area whilst also protecting it completely.

Sabatons were basically metal shoes and usually ended in a point, again there was some fashion element to the designs and wealthy medieval knights would customize the design to keep up with the late. 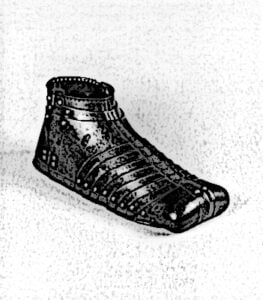 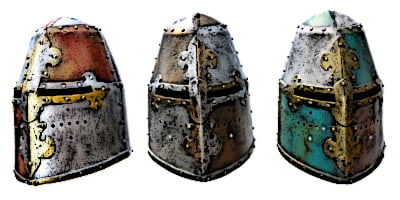 Some helmets had visors to protect the face that could also be lifted up to allow the knight to be able to breathe more easily and for better vision, they would usually always be down in the midst of battle. 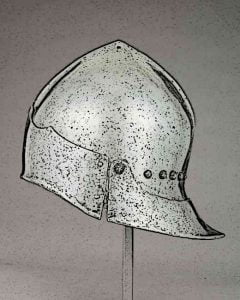 Bascinet helmets became popular in the mid-14th century, these are the instantly recognizable knights’ helmets with small holes in them. 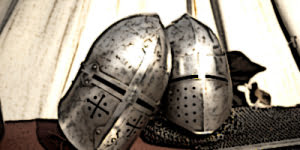 There was also a medieval helmet called the houndskull which was a type of Bascinet helmet which had a pointed visor. This helmet was replaced by the lighter ‘sallet helmet’ around the 1440s. 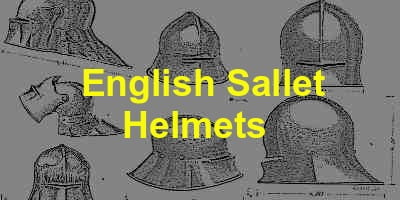 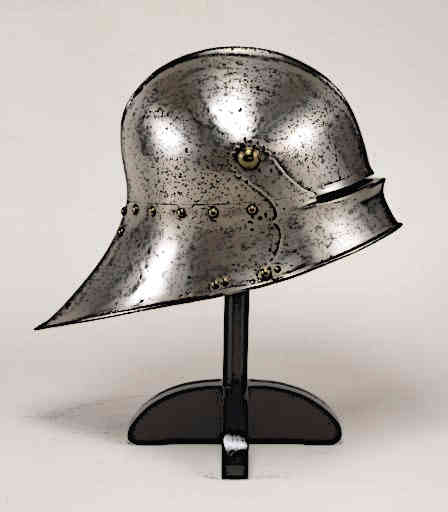