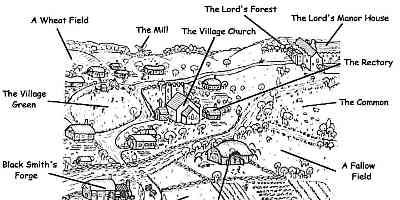 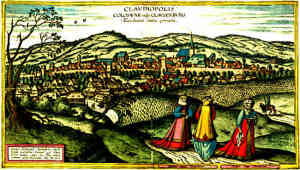 A Medieval Village can be seen in the distance

What Types of Buildings were there in a medieval Village

How was the running of a Medieval Village Organised

The medieval village was governed under the medieval feudal system and thus the running of a medieval village was closely linked with the relationship between Lords and the peasants or serfs. The peasants worked on the lands of the nobles and their sustenance depended on the grants offered by the nobles in various forms, including food and other provisions. A lot depended on the whims of the lords who could destroy the lives of their peasants on petty pretexts. The nobles or the lords also had certain judicial and legal powers over the serfs or peasants. For instance, the disputes that arose in the jurisdiction of a certain noble could be decided by that noble with the disputants having no right to appeal except to the king himself.

Who Lived in a Medieval Village

Broadly speaking, there were two classes of medieval people inhabiting medieval villages. The first class was that of nobles who overlooked the affairs of the villages and the other class was that of commoners. The class of commoners could be further subdivided into villeins, cottars, servants, and freemen. Villeins were the people who did not own any land and tilled the land of the lords. They could be turned out of the village if the lord was not pleased and thus had very limited rights. Cottars were individuals who had land of their own but it was so small that they nonetheless had to work for the lords too. Then there were freemen who had land that was sufficient for their sustenance. They could also sell their land and move to a different manor. At the lowest end of this hierarchy were the servants who were used in the manor house by the lords and were provided food and lodgings for their services. 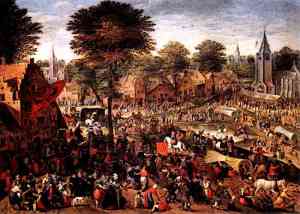 A busy day in a Medieval Village, It is a Festival day

What was the population of a Medieval Village

The community in a medieval village was called a manor which was arranged along a single street with houses on both sides. Surrounding the manor were fields, pastures, and meadows and it was also common to build the community on a place which had a stream nearby as source of water. The large manor house was reserved for the lord of the community while the houses of common people were usually made of mud or stone. Another common sight in the medieval village was a windmill whose purpose was to grind the corn. The mill was owned by the lord while ordinary people could take their own corn to the mill for grinding for which they had to pay a certain amount of tribute. Tenth part of the total village produce was given to the church which was stored in the tithe barn. Some medieval villages also had dovecots to store pigeons as pigeon meat was eaten as a delicacy.

The distinguishing factor of a medieval village was its self-sufficiency. The needs of people mainly consisted of water, food, and clothing, all of which could be fulfilled with the village produce. Wood for houses and furniture, on the other hand, was provided by the forest. Fax, wool, and leather were used to make clothes and the farm implements were manufactured at the village smithy. Trade and travel were uncertain and bore considerable expense which was generally out of reach of the villagers. Thus each medieval village acted as a self-sufficient unit of medieval life.