Love is a subject that transcends time and place. Today’s way of expressing and showing love differs a great deal from the way love was expressed and shown in the Medieval times. In those days, a firm system of love and courtship was practised. Strict rules governed courtiers and defiance of these rules may have resulted in social scorn.

Courtly love was basically a culture that prevailed in the Medieval times that directed the relationship between members of the court – usually a knight and a noble lady as publicised in medieval literature. Rules were set regarding how a lady should show her admiration for a knight and how a knight should return her affections or declare his intentions of love. Despite the rules surrounding courtly love, the moral parameters were vague. Parties could become deeply engrossed in a relationship, regardless of their civil status.

According to historical records, Medieval courtly love was first practised in the 12th century in Aquitaine, France. The practice spread across European courts. Eleanor of Aquitaine, who was queen of France and later England, and her daughter, Marie, Countess of Champagne were credited for the development and influence of these romantic notions. Eleanor’s grandfather was a troubadour so she spent most of her childhood reading poetry, listening to music and appreciating the arts at the court of Aquitaine. She later brought these interests to the English court. Several vernacular narratives were written for and in honour of Eleanor. In Provençal French, courtly love was referred to as fin’amors.

It was not until the 14th century that English courts started adopting the ideals of courtly love. The practice prevailed until the 16th century but around this time, marriages of convenience were rampant. Courtly Love was no longer the goal. Families arranged their children’s marriage to increase their wealth and status in social circles. Those who sought real romance had to look elsewhere, often times outside the marital bonds. 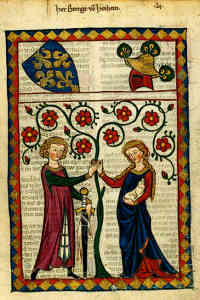 The rules that governed courtly love were described in detail by Andreas Capellanus in his book “Art of Courtly Love”. The rules can be summed up as follows:

The ambiguous parameters of courtly love often led to trouble within the courts. Its members were nevertheless willing participants. 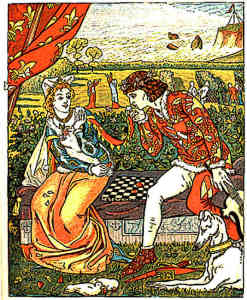 Courtly Love in medieval Times in a medieval garden

The incidents that transpired in courtly love poems were a stark contrast to the actual practice. Andreas Capellanus wrote Art of Courtly Love towards the end of the 12th century. Written completely in Latin and allegedly dedicated to Eleanor’s daughter, Countess Marie of Champagne, this work seriously described the rules that governed courtly love. The Knight of the Cart, written by Chretien de Troyes and dedicated to Eleanor of Aquitaine, was the literary piece that first introduced Lancelot’s passionate love for Guenevere, King Arthur’s wife. Unlike Capellanus’ work which seriously discussed courtly love, Troyes was critical (others say “mocking") towards the conventions of courtly romance. Joining the ranks of these well-known poets is Geoffrey Chaucer, author of Canterbury Tales, who wrote about courtly love for a married woman in The Miller’s Tale.

The feudal system and the consequent relationship between a knight and his lord had also influenced the rules of courtly love. The knight would swear an oath of fealty to his liege lord’s lady just as he did with his lord. In literature, should a knight enter a love relationship with his courtly lady, the latter dominated the relationship and the knight had to obey and submit. Though courtly love may not be consummated and the lady may be oblivious to the knight’s affections, the knight was propelled to do great deeds so as to feel deserving of his lady’s love if not to earn her favour. Courtly love was one of the engines that fuelled a knight’s valour.

The Tradition of Courtly Love

Courtly love was conducted through different stages. In the Medieval times, love was not love until each stage was followed:

Courtly love emerged out of the need to express and show love in the Medieval times. Despite its strict rules and unclear boundaries, it gave knights a sensational reputation in history. The present civilization is still replete with the ideals of courtly love though a number of the rules have changed.