A Lancer was a type of cavalryman who specifically fought with a lance (Large Spear) during battles. Lances were heavier compared to spikes and spears used by infantrymen and thus more suitable for cavalry charges instead of infantry.

During the late medieval times, medieval lancers became an important component of every medieval army.

The word lancer is derived from the word “lancea” which was a javelin or throwing knife during the Roman times.

The Greeks used the term “longche” for the same weapon. Originally the term was used for a small throwing spear and thus the English word “launch” is derived from the Old French “lancier”.

However, with the passage of time, the term came to be associated with large spears not thrown but instead used for thrusting by heavy cavalry.

While medieval lancers were an essential element of the military during the medieval times, the use of lance is found among ancient Greeks and Romans as well as Assyrians.

The use of long thrusting cavalry spears was particularly widespread among the Hellenistic armies.

A similar long thrusting spear was called kontos (Greek: κοντός) by the Romans. This was usually 3 to 4 meters long and held with both hands. During the medieval times, lances were also used by the Byzantine cavalry which was used along with the mounted archer formations.

These weapons were used in mounted as well as un-mounted forms. Other than the use of these long thrusting spikes in battles.

But there was also another important type of medieval lancer who was not a professional soldier but instead acted as a mercenary whose services could be hired by anyone. 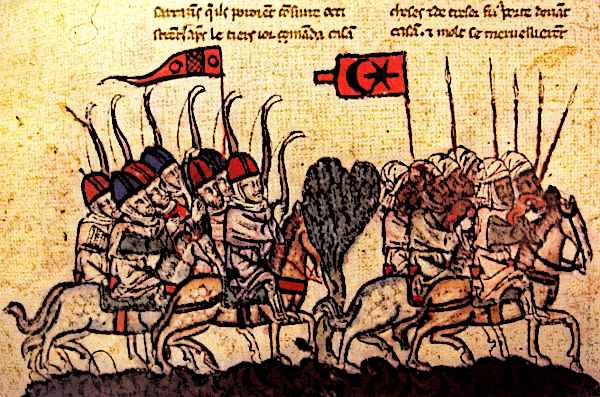 Medieval Lancers Cavalry in the Battle Of Homs

Training of medieval lancers became important during the late medieval times. Since the handling of the long spikes required considerable skill, special attention was paid to proper training.

The most important tactic of medieval lancers during a battle was a full-gallop close-rank formation with underarm couched lances. The French method is known as “en haie” had lancers in a double line while the German method had lancers drawn up in a deeper formation.

These two tactics remained the dominant method used in Europe during the late medieval times.

A Medieval lancer was a cavalry soldier who was an expert in the use of long spikes known as lances. Considerable skill was required to use lances during a battle and thus extensive training was carried out.

Various formations of medieval lancers were used during battles, although two formations known as French and German formations were the most popular.