Before the Troubadours and the Trouveres emerged, the minstrels graced the courts and were favoured by royalty. Over time, these medieval poet-musicians lost their significance among the aristocracy. Minstrels were the bards of Medieval Europe. They composed and sang songs that told tales of their journey’s or recounted significant events in history. medieval minstrels musicians spun their own stories but there were others who simply memorized and exaggerated myths and legends. Medieval Minstrel musicians used to be a fixture in high society but slowly faded into the background when the courts grew more sophisticated and the Troubadours rose in prominence. Those retained by the royals eventually became court jesters.

Once the Troubadours and Trouveres replaced the minstrel musicians at courts, Medieval minstrel musicians started to wander and performed in the streets. They were well received and continued to exist until the Renaissance period. Though their popularity greatly diminished towards the end of the 15th century, minstrels were known to have started the trend of “travelling entertainers" – a way of life that is still practiced in the current era (i.e. buskers and street musicians). 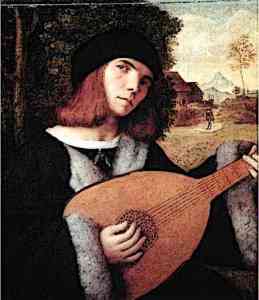 Minstrel medieval musicians often joined and festivities in great numbers, carrying with them their accompanying instruments of choice. While some minstrels musicians prefered to play the harp or pound the kettledrum, others would rather strum their fiddles, lutes and citterns or blow away on their bagpipes, flutes and flageolets.

Medieval Minstrels in Court and on the Street

Though medieval Minstrel musicians originally sung and recited their poems in court to the delight of the royalty and nobility, they were soon replaced by the Troubadours and Trouveres medieval musicians. The minstrels began to share their stories in the streets. Common folks and fellow travellers soon became their most avid listeners.

The minstrels were part of a large group of wandering poet-musicians who sang verses to people from all walks of life using a lute, a harp or any other accompanying instrument. They were of humble origins and wore bright colours while performing.

While Troubadours and Trouveres covered different forms of music, medieval minstrels specialized in ballad music, usually sung with accompaniment. They were just as fond of singing songs of courtly love and heroic feats as their elite counterparts.

Wandering minstrels sung ballads about the ideals of courtly love, several of which could be found in literary works written by various Medieval authors. They also memorized long poems about knights who honoured the code of Chivalry and gave life to them through their ballads. At court, they entertained the courtiers with songs of heroic deeds otherwise known as chansons de geste.

The minstrels had a gleeful image and their audience looked at them as sources of entertainment. They earned their income by singing ballads. Wandering minstrels declined and many hooligans and bandits started posing as minstrels to deceive people. As a result, King Edward IV ordered all minstrels to join the Guild of Royal Minstrels. Membership was mandatory and those who failed to join the guild had to stop being minstrels.