As their name suggests, string instrument were a family of musical instruments which utilised the vibrations of strings. Typically, strings were stretched over a wooden body or within a wooden framework and a player would strike them to produce different sounds.

The length of the strings, their positioning and their total number differentiated different stringed instruments. Most popular string instruments that were used during the medieval era included lute, harp, chittarone, cittern, rebec, dulcimer, gittern, viol, Vielle and clavichord. 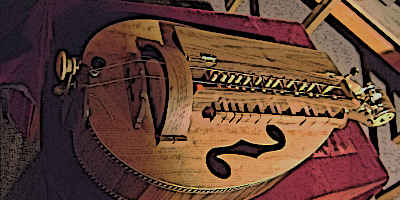 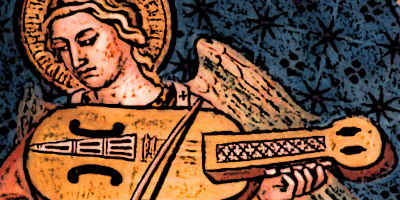 Psaltery is a musical instrument which is originally dated back to ancient Greece. It is a stringed instrument with varying lengths of strings which are plucked to produce different sounds. The instrument was a popular choice for producing music since the beginning of Christianity and remained popular throughout the medieval ages. In the manuscripts and extant art work from 10th to 15th centuries, numerous depictions of figures playing psaltery are found, further reaffirming the instrument’s widespread use in medieval Europe. The medieval variants of the instrument differed in the number of strings and its shape.

The lute has been a popular musical instrument in many ancient cultures. It became popular in medieval Europe due to the interaction of European culture with the Moorish Spain. The lute was introduced in the early medieval era in Spain and Sicily. It came into wider use when Frederick II patronised Muslim musicians in his court. By 14th century, the use of lute spread to all regions of Italy, Spain and even in German areas. Medieval European lute typically comprised of 4 or 5 strings on an almond-shaped instrument plucked with a quill and a bent neck. The design of the lutes varied greatly and their use in different sizes was common. Lutes were particularly common with French troubadours in medieval ages.

Fiddle was a bowed stringed musical instrument which developed from the Byzantine musical instrument called lira. The lira was a very popular stringed instrument in the Byzantine Empire which eventually led to the creation of many other instruments in medieval Europe. By 11th century, lira had become a popular instrument in medieval Europe and was often termed “fiddle”. By later medieval era, two types of fiddles had evolved in Europe. One of them was a smaller square-shaped fiddle which was held in arms when playing and which eventually led to violin. The other type was a larger fiddle held between legs by a seated musician when playing.

Rebec was a medieval string musical instrument with a pear-shaped body which remained popular in parts of Europe from 13th to 16th centuries. Rebec typically had only three strings which were played with a bow. Rebec was another instrument that was derived from the Byzantine lira and became very popular on the Iberian Peninsula following its Arab conquest. It became a preferred musical instrument in the Andalusian culture which evolved as a result of Moorish conquest of Spain and was later transferred back to the Ottoman Empire following Reconquista. In the Ottoman Empire, rebec became a popular instrument in tea houses.

Citole was a stringed musical instrument which was commonly used in medieval Europe. Many researchers claim that citole was the very instrument which was the precursor to the modern-day guitar. Earliest mentions of citole in literature date back to the 13th century. The standard type of citole had four strings and a body which was characteristically made in the shape of a holly-leaf. It is often considered either a variant of or closely related with psaltery, which is a similar musical instrument.

Viol was another medieval stringed instrument much like many other instruments used by musicians in medieval times. The design of a viol was typically played by a musician while placing it between his legs in a seated position. It included six strings which were struck with a bow, much like the fashion of the later violin. The instrument is considered a direct precursor to the violin as it is used today. Viol was a popular instrument among the troubadours and minstrels in the medieval era.

Oud was originally an Arabic stringed instrument which reached medieval Europe when the Islamic culture reached Spain following the Moorish conquest in the 9th century. The oud is considered the original precursor to the medieval European lute. However, in itself, out was a musical instrument which was iconic in the cultural interaction between the East and the West in the medieval period. Oud became a regular part of the musical performances in the Spanish royal court by 13th century. Manuscripts dated to the 13th century and compiled during the reign of Alfonso X contain depictions of ouds being played by Christian music players.

Spinet was a musical instrument which came into use near the end of the medieval era. It was a stringed instrument coupled with keys and resembled the harpsichord. Every key or note in spinet corresponded to a single string of steel or brass, producing a unique sound of its own. The early form of spinet was rather small in size and became common in medieval Europe during the 15th century. Its basic design was later enlarged and the spinet was turned into a harpsichord. Another variation of the spinet was called clavicitherium.

A cittern was a medieval musical instrument which was shaped much like the modern-day guitar. It generally comprised of a pear shaped body with a long length at one side and along the body were stretched four courses of strings. The strings of a cittern were played with a quill to produce a variety of sounds.

A Vielle was an instrument somewhat similar to the medieval fiddle. It was commonly used in medieval Europe and was frequently employed by the troubadours and other public musicians. A typical Vielle comprised of body carved out of wood and running the length of 16 inches. 5 strings would stretch over this body from one end to the other and the player would typically use a bow to play the strings and produce various sounds by manipulating the strings with the other hand at the same time. The medieval origins of Vielle are believed to be in France. The instrument soon became obsolete in the face of other, similar instruments which became more popular, such as the fiddle.

Harpsichord came into being in early 15th century when innovations were made to the basic design of a psaltery and a keyboard was added to the structure. Rudimentary harpsichord designs comprised of a harp-shaped body fitted with numerous strings of wire. These strings were struck with the help of quills which, in turn, were manipulated by the player using keys. The harpsichord was placed horizontally upon the legs of the player, much like the grand piano was later positioned. A damper was added to the later design of harpsichord which served the purpose of damping the sound of a key after it was released.

Hurdy-gurdy was a popular musical instrument used in medieval Europe. The earliest forms of the hurdy-gurdy originated in monastic singing dating back to the 10th century. An instrument called organistrum was the precursor to all subsequent types of hurdy-gurdy. Organistrum itself comprised of a guitar-shaped body with strings and a neck that stretched on to include the keys for manipulating the strings. Organistrum had to be played by two players. In the later models of hurdy-gurdy, the instrument was designed so that a player would crank the strings and hit the keys on his own, without requiring a second player. It is believed that the earliest forms of hurdy-gurdy came into being in the 9th and 10th centuries. In the next few centuries, hurdy-gurdy became one of the most popular musical instruments among the troubadours in medieval Europe.