Medieval waits musicians were first served as town watchmen, who were tasked to play instruments as a way of informing the towns people of impending danger. From watchmen, the waits grew into organized groups of musicians that played music for the towns. Similar to modern-day local marching bands, the waits not only composed their own music but they also played them during important town ceremonies and events. Waits wore liveries and silver chains that bore their town’s coat of arms and were paid salaries. The town was basically the waits’ employer and they derived duties from the events surrounding the town.

The waits played their music in the morning and at night but not at a time when everyone was asleep. It was also the waits’ duty to wake the towns people by playing wind instruments under their windows.

Wait musicians played a variety of instruments, but most of the time, they played loud, sharp wind instruments like the shawm (a woodwind musical instrument that is said to be the predecessor of the Hautboy and the Oboe. Its structure is composed of a single elongated wooden body that flares into a bell-shaped opening, similar to a trumpet. The shawm eventually became known as the wait-pipe because of its close association with the waits. Wait-pipes were blown whenever the waits spotted dangers and threats. The waits later played other instruments like the fiddle, bagpipe, lute, viol and sackbut. 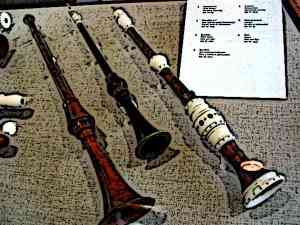 The waits cover several functions including that of watchmen and wind instrumentalists, thus their definition is not easily decided. In the early Medieval era, they were castle watchmen who stood guard on watchtowers or kept watch over castles at night while everyone in the town was resting. They also patrolled the streets, always on the lookout for danger.

Waits play a mixture of entertainment and civic-oriented music. Although their music was used as background for important town occasions, it was ultimately played for entertainment purposes. Historical records did not mention whether waits were required to play music outside of the town’s affairs or if they ever played other types of music.

As official town musicians, the waits held free concerts for the towns people to enjoy. Most of these concerts were sponsored by the town. They did not specialize in lyrical poetry and theirs was mostly loud accompanying instrumental music, played to commemorate an event or ceremony. The waits had to be present during town parades and processions for civic dignitaries. Since most of the instruments they used were wind instruments, wait music was, for the most part, governed by windy tunes and measured beats.

Abolished in 1835 by the Municipal Corporations Act, the waits ceased to become a town band. The name Christmas Waits remained, however, and this pertains to a group of people who wish to form a band and sing carols for a fee around the town or village, all throughout the holidays.