Drinks of various kinds were an essential ingredient of the diet during the medieval times. Besides various other reasons, this was also because access to clean water was not guaranteed and water-borne diseases were prevalent.

Medieval Drinks, particularly wine, were also preferred with food as water was generally considered bad for digestion. The most common medieval drinks were alcoholic which were considered nutritious and were also less prone to putrefaction because of the presence of alcohol.

Additionally, milk was confined to the young or elderly and was mainly consumed by the poor or the sick. Among the nobility and royals, wine was the preferred beverage while the Medieval drinks of the common people were mainly beer or ale.

Wine as a drink in Medieval Times

The most prestigious beverage amongst medieval drinks was wine which was also considered a healthier choice. The quality of Medieval wine varied, depending on various factors such as the number of grape pressings, type of grapes, and vintage.

Wine obtained from the first pressing was amongst the finest of medieval drinks and was reserved for nobility. The quality decreased with second and third pressing and wine from these pressings went to the lower classes.

The highest quality red wine as a Medieval drink was well beyond the reach of the common people as it required very expensive equipment and storage, as well as specialised knowledge. Documents on medieval drinks suggest that wine preservation was one of the main problems in the entire process. 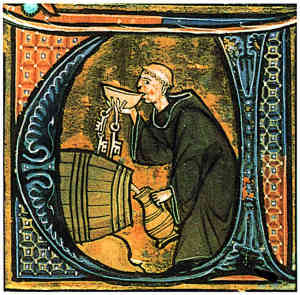 A medieval monk is sneaking a medieval drink of Ale

Ingredients of Wine for drinks during Medieval Times

Wine was also used as a medical remedy for various problems. For instance, red wine was considered good for digestion but other than red wine, spiced or mulled wine was highly recommended by physicians.

It was thought of having highly vaporising effect for foodstuffs which was augmented with the addition of spices. Spiced wine was a very special kind amongst medieval drinks and was particularly popular during the high medieval times.

It was made by mixing the ordinary red wine with a variety of spices including ginger, pepper, cloves, and others. It was so popular during the late medieval times that bagged spice mixes specifically made for wines were available from merchants. This was just one indication of the rising demand for spices in Europe during the same period.

Mead was another one of the highly popular medieval drinks and was also known as honey wine. It was made by mixing honey and water through fermentation with yeast. It was common to brew mead with spices, grain mash, or fruits.

Mead was not just popular among the medieval drinks but was also well know throughout ancient Europe, Asia, and Africa. It has also been mentioned in various epics from early medieval times. For instance, the famous Old English epic poem Beowulf mentions Danish warriors drinking honey mead.

Mead-making was also common as a by-product of bee-keeping in monasteries and areas where grapes were usually not found.

Just like wine and other medieval drinks, mead also has various forms depending on its ingredients. It also varied in its flavour which depended on the source of honey used as well as other additives such as fruits and spices.

Additionally, the fermentation and ageing processes also had their impact on the flavour of the drink. Mead that contained different kinds of spices and herbs was called metheglin and the one that contained fruits was known as melomel.

Finally, the kind of mead that was obtained through fermentation with grape juice was called pyment. The taste of meat varied from beer-like bitter taste to semi-sweet or sweet. 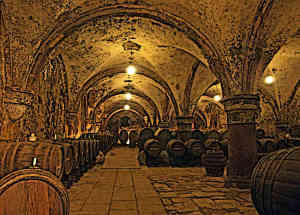 In the northern regions of Europe, grape cultivation was almost non-existent which made access to wine very different, even for the nobility.

Not many people could afford drinking imported wine as it was too costly. Thus in the northern region, beer was one of the most popular medieval drinks even among the nobility.

Beer, however, was not given much importance among the medieval drinks and was also not considered medically worthwhile. In fact, many physicians attributed various harmful effects to beer such as bad breath, rotting teeth, and stomach fumes.

But there were also certain advantages associated with beer as a medieval drink. For instance, it was thought to facilitate urination and making one’s flesh smooth.

During the early medieval times, it was common to brew beer in monasteries as well as individual homes. During the high medieval times, however, breweries began to be established in various towns and became the primary source of production.

Ale was another common beverage amongst popular medieval drinks. The main difference between ale and beer was that the former was brewed without hops and the latter with them.

Its ingredients were grain, water, and yeast with which it was fermented. Ale was generally considered a special type of beer and was also known as godale, which was derived from two German words god and ale, meaning ‘Good Beer’.

Following the crusades, the use of spices became widespread during the high medieval ages and spices began to be used in beer and ale as well.Some of the common spices used were juniper, sage, gentian, cinnamon, and others.

During the medieval times, ale was generally brewed at home by women and was meant for domestic as well as small commercial purposes.

Apples were used in case of cider while perry was produced form pears. Similarly, blackberries or black mulberries were used to make Murry and prunelle was made from plums.

Other than these drinks, tea and coffee were also well known, although these were less common compared to the alcoholic drinks. Herbal infusions were generally reserved for patients and for medical purposes. Both tea and coffee became more popular by the end of the medieval times and the beginning of the modern era.