Before any kind of fortification existed during the Middle Ages certain towns, places of interest or important locations were open to attacks and pillages. Structures whose sole purpose was to defend against these attacks were introduced and they were called Motte and Baileys castles.

What is a Motte and Bailey castle

A motte and bailey castle is a fortified structure built with a wooden or stone keep which was situated on the top of a raised dirt mound called a motte and accompanied by a protective ditch with its own palisade which surrounds the courtyard which is called the bailey.

Why were Motte and Bailey castles built

During the Middle Ages, having anything to protect an important location was always welcome, especially if it was cheap and easy to make. Motte and bailey castles fitted the bill as they were easy to build, even with unskilled labor and still provided a very formidable defense.

Who built Motte and Bailey castles?

During the Norman invasion of England in 1066, motte and bailey castles were introduced to this territory and later rapidly started appearing in England, Wales, Scotland, Ireland and Denmark during the 12th and 13th centuries.

During the Middle Ages there were a few different versions of the original motte and bailey castle design due to the different needs of the people building the castle itself. The designs were meant to protect against external attackers and to protect from different kinds of attack, from enemies such as the Vikings, Slavs and others.

Features of a Motte and Bailey castle

The castle design was very simple, yet very effective at repelling enemies. The whole design was made up of two structures, from which the name came, a motte and a bailey.

The motte was an artificial or nature made mound of earth on top of which was the main keep made of wood or stone and around the motte was a bailey, fortified palisade that was very sturdy and hard to take down or destroy ( at the beginning of the Middle Ages when the castles started appearing ).

The keep which was on top of the motte was defended quite well due to the height of the motte itself and the palisade wall that offered the best protection for the cheapest possible price. 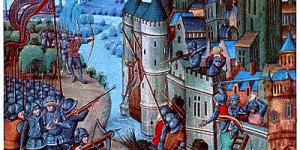 The defense that this castle design provided, at that time, was amazing. A very cheap design offered protection against cavalry without a problem. Every attacker was forced to attack on foot, climb or crawl up a very steep mound of earth while being under fire of archers, stone throwers and similar.

The whole attack on a motte and bailey castle would need a lot of co-ordination, luck and courage due to the defensive features of the castles design. Storming the gate, taking it down and trying to take on the tower was never an easy thing to do with constant projectiles flying down on the attacker.

Motte and Bailey castles in England

During the attacks of William the Conqueror on England in 1066 he brought with him the design of the castle itself, which was later used in order to build a lot of these castles across England.

As is with all castles, each had a particular role to play and each built castle had a sole purpose of defending a place of higher importance. Due to its design, with unskilled labour, a motte and bailey castle only took a few weeks to build and that was the main reason why so many existed during this time.

The decline of the Motte and Bailey castles

During the mid-medieval period the castle design became less and less popular due to introduction of stone in castle building. Another reason was the upgrades in the military force for castle sieges and because it became a lot easier for the walls and tower itself ( if it was made of wood ) to be set ablaze by the attackers.

Around the start of the 12th century, this castle design was not being built anymore and all the existing ones were either upgraded to stone keeps or were neglected and abandoned.

Replacement of Motte and Bailey castles

Even though wood was a very powerful defense at that time, the introduction of stone gave new meaning to defense and when it was introduced in the military siege equipment, wooden walls did not stand much of a chance and they could easily be destroyed by the large stones that were throw at speed by giant wooden catapults such as Trebuchets.

Stone castles began making an appearance on top of mottes but as time went on they started relying less on the motte and bailey design and more on the defensive features like the gates, walls and towers. After the 12th century over 100 stone castles could be found across England, massive keeps were erected either on pre-built mottes or the motte that was built around the castle.

End of the Motte and Bailey Castle

The motte and bailey provided formidable defense against attackers during the earlier stages of the Middle ages and as time passed by during the middle ages they were either neglected or turned into stone castles that held the same design. Windsor castle is the only motte and bailey castle design that is left for our world to see.