Not everyone could achieve medieval knighthood and the honour was reserved for a select few. An important condition of becoming a medieval knight was to hail from nobility. While this was not the necessary and only condition, it was very difficult for a person outside nobility to aspire for medieval knighthood because it required a lot of money for the training and buying of weapons. Another way to become a knight was to prove one’s worth on the battlefield.

The first stage towards becoming medieval knights was that of a page boy. This started by training a boy when he was seven years of age. Some important elements of the training of page boy included learning to use weapons, riding a horse, and showing a certain kind of ethical behaviour which was eventually to become the Code of Chivalry of medieval knighthood. All these things were taught to the page boy by the squire, which was the next step in medieval knighthood.

A page boy was elevated to the status of a squire which was the second rank of medieval knighthood. Squires were generally teenagers who had their own defined duties, among them being the training of the page boys. Squires were assigned to specific knights to closely observe the life of the knights and behave accordingly. They also went to the battlefield with the knights to prove their worth as brave fighters. 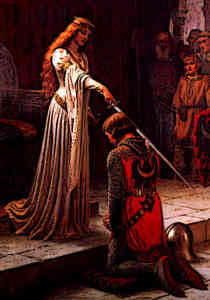 A Medieval Squire earns his knighthood in a dubbing ceremony

Training to be a Medieval Knight – Knighthood

Receiving a medieval knighthood was considered the highest honour and generally occurred during the Dubbing Ceremony. However, this was not true for all squires who received knighthood since some of them were knighted on the battlefield. Before formally receiving the knighthood, the squires needed to learn about castles and siege warfare which were essential for medieval knighthood.

The knighthood was received during a very formal ceremony known as Dubbing Ceremony. This was the ceremony during which the squire was elevated to the status of formal medieval knighthood. It usually took place when the squire was twenty one years of age. During the ceremony, the squire would kneel before the king, lord, or another knight who would tap the squire with the sword formally inaugurating his knighthood. The knight would then be presented with a pair of riding spurs along with a sword.