Food ingredients used in the medieval ages were not very different from the modern age, although the medieval recipes had distinct medieval characteristics.

The essential ingredients such as bread, soup, meat, milk, and vegetables were as important in the medieval times as they are today.

What mainly differed was the method of cooking, given the open hearths of those times, in addition to mechanisms of farming, cultivation, preservation, and transportation.

With the passage of time and rapid advancements in almost all domains of the food chain, the diversity in food recipes has considerably increased since the medieval times.

The most important ingredients that were included in the medieval recipes were different kinds of meat, breads, milk, green vegetables, and fruits.

Medieval Food such as Bread in the medieval times had the central place in the diet of both the rich and the poor.

A variety of medieval bread recipes existed, although not all recipes have survived over the course of centuries.

The most important component of medieval bread recipes was ale-barm which was used to raise the dough, which can be called the equivalent of today’s ale and fresh yeast.

Bread was baked using the wheat flour which gave it a fine, whitish look.

Honey was also often used along with the wheat flour to make bread. Among the peasants, the most common form of bread was the rye bread.

The most common way of baking the bread was to grind the grain by hand in a wooden mortar, mix it with water, and bake it.

This kind of baked bread was known as unleavened bread or oatcake. 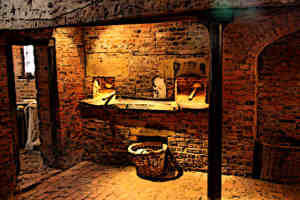 Medieval people had a different concept of dinner compared to the modern age.

Dinner was a mid-day meal which was generally followed by a light supper in the evening. Lavish dinner banquets and feasts that included lavish medieval dinner recipes were disdained by the clergy and were generally avoided, although the practice was not entirely non-existent.

However, dinner was prevalent among the working classes and mostly consisted of small meals and snacks.

Various medieval dinner recipes were in the vogue and the variety increased with the passage of time as the hold of church on morals and practices grew weak.

Tart de Brymlent was a common medieval dinner recipe where fruit was combined with eggs, meat, and fish. It was a form of fish pie which consisted of salmon or haddock mixed with figs, apples, and raisins.

Feasts were an important component of medieval customs and an extensive choice of foods was demanded by the social etiquette.

Feasts were carried out in the Great Halls of the castles where The Great Table was reserved for people of distinction.

These feasts could have three to as many as six courses all with very distinct medieval feast recipes.

Important components of medieval feast recipes were goat and chicken meat, stuffed capon, jellies of swans or peacocks, in addition to cream, cheese, and strawberries. Consumption of fish was also common during the medieval feasts, which included red herrings, stock-fish, white herrings, and sturgeon.

An important medieval recipe for vegetables was called “Wortes” which mostly included leafy edible herb-plants like parsley as well as other vegetables such as cabbage, onions, and spinach.

It was also not very uncommon to combine the various available vegetables under the term “potherb” which, in addition to vegetables, also contained various kinds of edible flowers.

Vegetables were also usually served in the form of salad and medieval recipes for vegetable salads generally contained raw lettuce and vegetables tossed in oil and vinegar.

Onion was included in the medieval vegetables recipes for the common people mostly because it was generally disdained by the upper classes. 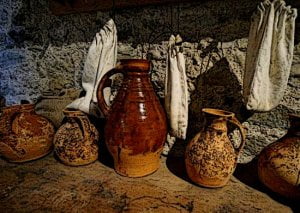 Medieval Jugs used to serve ale, cider and other drinks that were made to a medieval recipe

Meat played the most important part in medieval food, particularly among the nobility and during the feasts. It was the central part of the diet of upper classes and a wide range of medieval meat recipes have come down in the recorded form.

A variety of medieval meat recipes were used to make different kinds of dishes. For instance, there was Mete Ryalle which consisted of pork and chicken pies or Brawn en Peuerade which was prepared with pork or chicken and served in a thick wine sauce.

Among beef recipes, Stewed Beef was a notable one and was prepared by baking the beef ribs in a sauce of wine, onions, and currants.

In sweet dishes, Doucettes was a special pork and egg pie which was thoroughly seasoned with honey.

During the medieval ages, alcoholic drinks were preferred with medieval food as they were considered more nutritious and helpful in food digestion. Among the poor, the most common drinks were ale, mead or cider which could be prepared in various ways.

One way to make cider, for instance, was to pour water on apples and steep them to extract the drink. The rich preferred wine made of a wide variety of fruits.

One of the most common medieval drink recipes was called Clarrey which was made of wine mulled with honey and spices.

Caudell was another medieval drink recipe consisting of wine thickened with eggs. Sometimes wine in Caudell was replaced with ale.

Fruits that were mainly used for wine included cherry, raspberry, pomegranate, and mulberry.

It was also not uncommon to mix wormwood and rosemary with sweetened wine and flavor it with honey.

Medieval food recipes consisted of a rich variety of meat and vegetable recipes with a diverse range of beverages.

Meat was the most expensive ingredient and was thus mostly found on the tables of the nobility.

Vegetables, on the other hand, formed the central part of the diet of the poor.

The hierarchical structure was also followed in beverages. Overall, while there are certain differences in the modes of preservation and preparation, a lot of central ingredients have more or less remained the same down to the modern times.

Great Resources to further your education on Medieval Recipes!