Medieval Hurdy Gurdy instrument is said to have been originated from the fiddles during the medieval times. This happened sometime before the 11th century, although the exact time is not known. The 9th century reference in the work of Personal geographer tells that it did exist at that time. In Europe, it was introduced in the 11th century and continued to increase in importance. The instrument was then introduced in England during the 12th century. 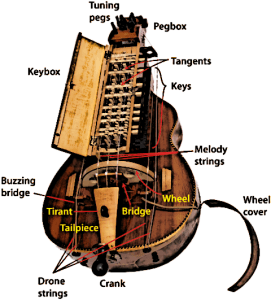 What Type of Instrument was a Hurdy Gurdy?

How was a Hurdy Gurdy Played?

The medieval Hurdy Gurdy instrument consisted of small keyboard and strings. The keyboard pressed the tangents which were small wedges made of wood. These tangents were pressed against the strings to change the pitch and produce the required sound. Constant variations in the pitch were possible because of the multiple drone strings of the medieval Hurdy Gurdy instrument. Additionally, it also had a sound board which was specifically used to make the vibrations of the strings audible.