The Medieval Vielle Instrument was a popular stringed instrument in medieval Europe and was similar to modern violin in outlook. A crucial difference of medieval vielle instrument compared to the modern violin was that it was longer and had a deeper body. It was also known by various other names such as “fidel” or “viuola” although vielle was the most commonly used name. 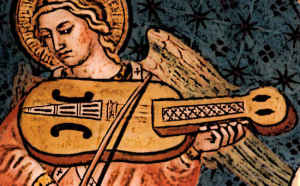 What Type of Instrument was a Vielle?

How was a Vielle Played?

A medieval vielle instrument was a stringed instrument and, just like the modern day violin, a bow was used to produce sound form the strings. It mostly had five gut strings in addition to having frontal tuning pegs which were used for fine tuning the instrument. In shape and playing style, it was similar to the Arabic instrument Rebab.