King Henry VII was the King of England from 28th January 1457 – 21st April 1509. He also ruled the Principality of Wales and was Lord of Ireland until his death.

King Henry VII was the first king of the Tudor dynasty. Before his accession to the throne, he was also known as Henry Tudor, 2nd Earl of Richmond.

Henry VII has the record of being the last known English King to access the throne by beating the opponent on the battlefield. 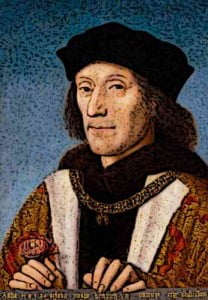 King Henry VII was the King of England from 28th January 1457 – 21st April 1509. He also ruled the Principality of Wales and was Lord of Ireland until his death

King Henry VII was born to Margaret Beaufort, Countess of Richmond and Edmund Tudor, 1st Earl of Richmond. His father had died 3 months before his birth. Jasper Tudor, Henry’s uncle and Edmund Tudor’s young brother had vowed to protect Henry’s mother who was very young at the time of his birth.

William Herbert assumed the guardianship of Henry and his mother after Edward IV became King and Jasper Tudor was exiled. Until 1469, Henry lived with Herbert. Henry was brought to court by Jasper Tudor in 1470 when he returned from exile once the Henry VI was restored as king, but had to flee a year later when Edward IV again came to power. The Next 14 years of Henry VII were spent in Brittany.

King Henry VII is the first English King, whose authentic visual record is available in terms of portraits. Henry at the age of twenty-seven was a tall and slender person, he had small blue expressive eyes, had fair hair and bad teeth. King Henry VII was lively and daring. He had a friendly disposition and was considered a very intelligent person by his contemporaries. He had very poor health.

Henry’s heir-apparent Arthur died in 1502 due to “English sweating Sickness”. Apart from being angry, Henry never showed his emotions publicly, but after his son’s death, he sobbed and showed extreme grief in the court. Next year when his wife died, he became very sick, shut himself away, and did not allow anyone to come near him apart from his mother, Margaret Beaufort.

He recovered from illness and in 1505, he planned to remarry to beget more heirs but his plans never materialized. On 21st April 1500, King Henry VII died at the Richmond Palace due to tuberculosis. He was buried at the Westminster Abbey near his wife Elizabeth. His second son Henry VIII succeeded him who was taken care of by Henry VII’s mother and Henry VIII’s grandmother.