This Article is focused on the Definition of the Knight who lived in the Middle Ages and not the modern version of Knights and Knighthood.

There are many ways to describe the medieval knight but what is the most accurate?

A knight is a man who has been given the ‘honorary title of knighthood’, in medieval times Knights could be given Knighthood from others Knights, bishops, religious, political people or other important people and leaders in medieval society!

In later times Queen Elizabeth ruled that a Knighthood could only be granted by a ruling monarch.

The Knight in the main provides a military service to a noble, monarch or Christian church usually for ‘land holdings’ within the feudal system.

Dictionary Definition of a Knight 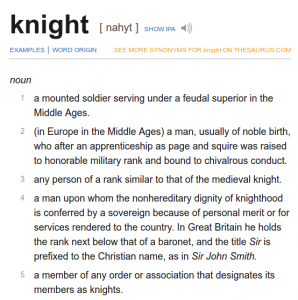 Definition of a Medieval Knight at Dictionary.com

In early medieval history a knight was a mounted warrior an ‘Elite Fighter’.

In the high and late medieval periods the exact role of the medieval knight became more established and connected with ‘Chivalry’ and the ‘Code of Chivalry’, Courtly Love, Knighthood, Plate Armor and Medieval Tournaments.

Medieval Knights were well placed in the Feudal system, they were usually bodyguards or mercenary fighters for a wealthy nobility, lords, Kings and received land holdings for their military services.

Knights could also described as vassals within the Feudal system – A Vassal was a ‘Land Holder’ a person who had land given to them in return for military services, loyalty and allegiance.

Although Knights were well regarded in medieval society, they were classed as lower level nobility. 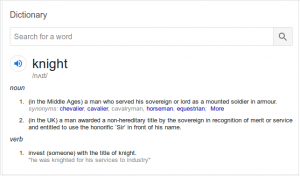 Definition of a Knight according to Google Search

Knights can be also be described as ‘elite mounted warriors’ who were skilled in horsemanship.

Knighthoods are still given today but modern knights are nothing like and have no connection to the traditional warrior knight of the Middle Ages.