A number of gun powder weapons began to be used in medieval Europe by the 13th century. Gunpowder was originally invented in China as early as the 9th century and it then travelled westwards reaching the Mongols, the Islamic world and then finally Europe.

The use of gunpowder weapons dramatically altered the military outlook of the medieval world, playing a major role in ushering in the Renaissance.

An arquebus was one of the lightest types of gunpowder weapons which were used in later medieval periods. The earliest use of the arquebus dates back to the 15th century.

Being a light-weight weapon, the arquebus could be carried by individual soldiers. When used at close range, arquebus fire could successfully pierce even the thickest plate armour.

A drawback of the arquebus was that it was slow to reload. This was resolved by using the arquebus in volley fire formations on medieval battlefields. In such formations, one line of soldiers would fire the arquebus and then march back to reload while another would take their place to continue the fire.

Until the volley fire technique was perfected, the arquebus was mostly a supporting weapon on the battlefield. However once volley fire drills became standard for most European armies, the arquebus came to be seen as a primary weapon with great degree of success. 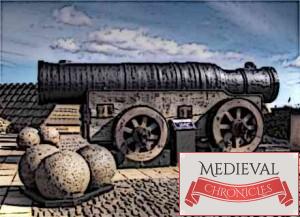 Bombards were mostly made of iron and were used to fire large stones. Their design was such that they were muzzle-loaded and had a small powder chamber at the rear. The key purpose to which this type of gunpowder weapon was put was during sieges.

Bombards were used to fire large stones with high velocity into the walls of a besieged castle, often with significant success. The use of bombards in medieval Europe is estimated to have begun as early as the 13th century and by the 15th century, they were being used as critical pieces of weaponry on major battlefields.

The Culverin was a gunpowder weapon which was used by the European armies in the late medieval and early modern period. A culverin was made with a light construction and a fairly long barrel.

Many variants of a culverin were light enough to be easily wielded by an individual soldier on the battlefield. The design of a culverin was such that a tube was filled with powder and with lead bullets at the front.

A slow match was used to ignite the powder which then shot the bullets into the direction of the enemy. Heavier variants of culverin also evolved which were used as replacements for the heavier types of cannons on the battlefield.