Norman Kings descended from the Vikings who had begun raiding northern France and later settled in the region of Normandy in the 10th century. Once settled in Normandy, Normans started launching military campaigns all over Western Europe, reaching Sicily, Italy and most notably, England. 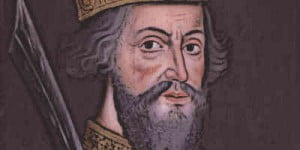 It was in England that Normans had the most effective success. Normans under William the Conqueror invaded England in 1066 and replaced the Anglo-Saxons as the rulers. This marked a permanent change and England became a Norman kingdom, producing some of the most notable Norman monarchs.

William the Conqueror originally held the title of the Duke of Normandy. After a succession dispute in England erupted between Anglo-Saxons, Danes and the Normans, William carried a sizable Norman force across the sea and landed in England in 1066.

He proceeded to defeat the last Anglo-Saxon king of England, Harold Godwinson, before subduing all England and having himself proclaimed the King of England. Despite facing stiff resistance, William campaigned extensively in England and through effective military organization and the use of castle-building, he put down multiple revolts in his new dominion.

Henry I was one of William the Conqueror’s sons. He ascended to the throne of England in 1100 after the death of his brother, William Rufus. Early in his reign, Henry had to face opposition from his brother Robert who disputed his claim to throne. Henry subsequently defeated Robert in Normandy and became the master of both England and Normandy.

His reign was marked by attempts to block the increasing influence of barons in England and to empower the monarchy at the expense of the nobility. At his Continental territories, Henry had to face many foes including the royal might of France. But he was able to retain his territories in Normandy as well as England successfully. He died in 1135.

King Stephen is notoriously famous for being the worst Norman king. He ruled England from 1135 to 1154, usurping the right of Henry’s daughter Matilda. His ascension to the throne plunged English into civil warfare and the barons profited from it by gaining significant power during his reign. To end the warfare, Matilda agreed to let Stephen rule in exchange for a guarantee that Matilda’s son would inherit the throne.

Richard the Lionheart was originally the Duke of Normandy. He launched a rebellion against his father, Henry II, by joining his brothers. The long conflict resulted in many battles between the members of the same family.

The conflict was ultimately resolved when Henry II named Richard his heir and died soon afterwards. He ascended the English throne in 1189.

Richard’s reign was popular with the English masses and became even more so when he declared open support for the Crusades.

He then joined the Crusade in an effort to liberate Jerusalem from Saladin. In the battles which took place on the Crusades, Richard’s valor earned him the title of ‘Lionheart’, making him the most popular of Crusade leaders.

Although he had some success and gained new dominions along the way, the declared goal of the Crusade failed and Richard eventually returned to England. He died in 1199.

We hope you enjoyed this article on Norman Kings such as William the Conqueror and King Stephen, if you would like to learn more about Norman Kings in Medieval times please see the links at the bottom of the article or within the page content.

We have also provided some links to great resources and books on medieval Norman Kings below!