Footsoldiers, or infantry troops, formed the bulk of medieval European armies, even though cavalry rose in importance. Infantry troops still remained vital since they did most of the fighting on the battlefield.

The round shield remained a popular type of shield in early medieval European armies. Such shields were used by the footsoldiers since they were inexpensive to produce and were sufficiently effective on the battlefield.

Carolingian footsoldiers, Anglo-Saxon footsoldiers as well as troops in other early medieval armies made use of the round shield. Round shields were typically produced from non-splitting wood, often with multiple layers of wood to make them strong enough.

Metal bands were used on the rim of such shields to make them withstand strong blows from an opponent’s weapon while leather was also used as an additional layer on the shield. Since they were inexpensive, footsoldiers would often use more than one round shield during a campaigning season. 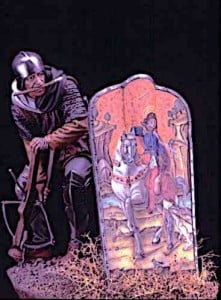 Footsoldiers using round shields in the early medieval period frequently drew up into shield wall formation during the battle. Such a formation involved soldiers standing shoulder to shoulder with their shields overlapping and forming a wall with no gaps.

This made it possible for footsoldiers to throw their javelins and other missile weapons from behind the shield wall without being exposed to enemy missiles in the open. The shield wall also made it possible for an all-infantry force to successfully ward off cavalry charges, as was the case at the 1066 Battle of Hastings before the Anglo-Saxons broke their formations.

The Heater shield was a small, light-weight shield which came into use from 12th century onwards. It was popular among footsoldiers as well as the knights and the footsoldiers particularly favoured it because it was light-weight and inexpensive.

The shape of the shield resembled a heraldic shield and it was usually long enough to cover a soldier from his shoulder to just below the waist. As piece of plate armour started to become available to footsoldiers as well, it became possible for them to guard themselves effectively with small heater shields.

A Pavise was a type of shield made for specialised use by medieval crossbowmen. This type of shield was designed to be tall enough to cover a crossbowmen frontally and guard him from incoming missiles. It also carried a special feature whereby it could stand erect on its own at the battlefield.

A crossbowmen would prop up the shield in front of him and take refuge behind it when he had to reload his weapon. The Pavise was popularly used by the footsoldiers of wealthy cities in late medieval Europe, such as in the armies of Genoa.