Heraldry refers to the coat of arms and related pieces of design which were used in the medieval period to identity a knight or a noble family. The use of shields of different colours and with various designs was central to the coat of arms and an entire body of literature came into being during the medieval period, detailing the significance of different types of shield designs.

Heraldry itself came into being as a direct result of a need for knights and noblemen to identity each other on the battlefield, which became next to impossible when they wore elaborate armours. The Coat of arms resolved this by allowing a person to be identified from a distance through the specific design of his coat of arms.

The use of zigzag lines on the shield, for instance, symbolised either fire and its properties or the sun and its majesty. Similarly, the use of wavy lines denoted the sea, river or a waterbody depending upon the owner’s home. The use of a crenulated line denoted a specific town while uneven lines on heraldic shields represented land. 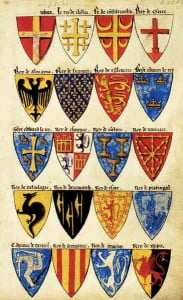 The specific colours used on heraldic shields symbolised different meanings. The use of the red colour, for instance, denoted that the owner of the coat of arms was a warrior or the owning family had a martyr. Blue colours represented loyalty and truthfulness.

Well-defined regulations in the medieval period specified what colours could be used by different sections of the society, such as knights and the actual nobility.

Apart from the choice of colours and symbols which gave meaning to a heraldic shield, the use of different kinds of stripes was also a common part of medieval heraldry. Different stripes denoted different meanings and they were frequently used on coat of arms.

Each type of stripe was also given a unique name of its own. A vertical stripe on the shield, for instance, was called a Pale and denoted military strength. A horizontal stripe was called a Fess and was used to represented honour.

Shields were the defining pieces of armour of knights on medieval battlefields, long before other kinds of defence such as plate armour came into use. It was for this reason that when the need for coats of arms arose, shields became the most popular and central elements used in the creation of heraldic achievements.