In German the Teutonic order state was called Deutschordensstaat and Ordensstaat.

It is thought that the order of the Teutonic Knights was founded in 1190 although like the other religious military orders of the medieval period such as the Knights Templar and Knights Hospitaller.

There is some disagreement about the exact date of the origins of these military militaristic religious orders.

Like other Knights of the medieval period the Teutonic Knights took vows of Chastity, poverty and obedience.

The Teutonic Knights was a German militaristic religious order, it was known as the order of brothers and was located in Jerusalem in the German house of St Mary.

The Teutonic Knights and Saladin

The Teutonic Knights were more akin to the Knights Hospitaller than the Knights Templar as they were created to care for ill, dying and injured Christian pilgrims.

The knights had a fighting purpose like the Knights Templar but also tended to the injured and dying Christian crusaders on the battlefield and in the hospitals that they had created.

These Knights were prominent within Jerusalem city up until 1187 when Saladin the famous Muslim leader conquered the city of Jerusalem, however so impressed was Saladin with the Teutonic Knights work that he allowed some of the Knights to stay in Jerusalem and continue with their work.

In the early 13th century the These Knights were led by a leader who was their grandmaster called Herman Von Salza. 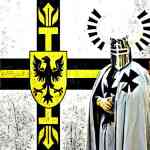 The Knights continued to expand and grow in power and it wasn’t long before they were one of the most powerful militaristic religious orders in the medieval world.

During the siege of Acre in the third Crusades the Knights were officially founded and became recognized as one of the great military religious orders in Europe.

The Knights horses were also covered in same the distinctive white and black cross as their masters.

The Teutonic Knights wore chain-mail and full plate armor under their white robes with black crosses, it it was common for medieval knights to wear a type of medieval helmet called “The Great Helm” during this medieval period.

These German knights horses which would usually be from the Destrier breed which were strong powerful horses, were also trained to fight themselves.

These battle hardened horses and would also wear full plate armor, including chain-mail and plate armor such as a Chanfron, which was plate armor for the Horses Face.

The white cloth covering for the Knights horse was called a trapper and would match the Knights white and black colors.

Teutonic Knights would usually have a large kite shield strapped to his back as he rode his horse. 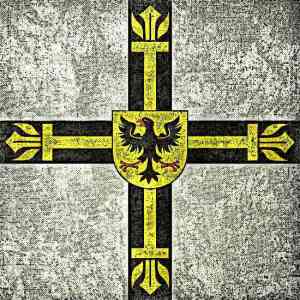 Grunge Flag of The Teutonic Knights

The favored weapon of the medieval knight was his sword and it was no different for the Teutonic Knights, A knights sword had special meaning for him and was part of his knighthood.

It was a weapon that no knight could do without, although medieval Teutonic Knights had other weapons, such as maces, war hammers and a of course a lance it was usually the sword that a medieval knight used the most in battle.

If a medieval Knight was unseated from his horse by the enemy and the battle went to ground, he would use his sword and protect himself with his shield.

If a German Knight lost both his sword and shield and there were no other weapons available such as Maces and war Hammers he would usually resort to using a medieval dagger such as Rondel dagger, which was good for penetrating gaps in the enemies armor.

Summary of the Teutonic Knights

The German Knights were well respected during medieval times and the Crusades.

As well as being fearsome warriors the these knights help care for sick, dying and injured Christians during the Crusades.

The German Knights also built hospitals and became a well respected and established religious military order during the crusades who carried out important work.

The Teutonic Knights in the Holy Land, 1190-1291 Reprint Edition