The Destrier was a particular kind of horse that was used by knights in wars, tournaments and jousting competitions during the medieval times. The name referred more to a general type of horse, specifically trained for wars and combats, rather than a specific breed.

As a horse, the Destrier horses were considered among the best and were highly treasured among knights. However, not many knights had destrier horse. This rarity further made the sight of a Destrier a more remarkable one in medieval times.

The name “Destrier” comes from a Latin word which means “right-sided”. Different researchers have variously interpreted this. Some are of the view that the knights who jousted or fought on top of a Destrier were usually right-handed, so the horses were given a name which meant this accordingly.

A different view makes more sense which holds that Destrier horses were probably trained to lead with their right foot in charging during wars and tournaments, and this specific aspect of the horse’s gait was referred to in its name. Some sources state that the Destrier was so-named because a knight’s squire led the horse with his right hand.

A Destrier horse was usually a type of horse who had been trained in a specific manner. Such superior trained horses were usually taken from a certain set of horse breeds but Destrier in itself didn’t mean any specific breed.

A destrier was trained from the earliest days of his life and were highly preferred in all matters related to combat. A Destrier could easily sprint, stop, turn around and make other movements as required by the rider with perfect ease and speed. Because of their training, Destrier horses had strong hind-legs, letting them shift their weight and make rapid movements easily.

Traditional Qualities of a Destrier

A number of extant sources from the medieval ages elaborate on the specific features which made a Destrier so desirable. These sources define a good Destrier to have a strong bone but a brief back, a neck which rose and arched elegantly, and a strong loin.

Moreover, a Destrier had a strong jaw and a broad face so that there was a goodly width of space between the eyes. Many breeds of horses had such traits but the particular training of a Destrier honed and harnessed these traits, making them perfectly suited for combat and tourneys. 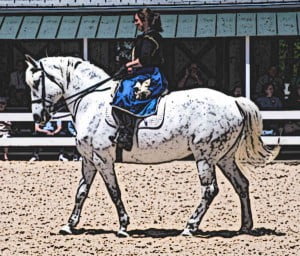 Given its specific set of skills in being agile, strong and swift, a Destrier horse was highly preferred in battles and tournaments

Destrier as the Battle Horse

Given its specific set of skills in being agile, strong and swift, a Destrier horse was highly preferred in battles and tournaments. For other horse-related tasks such as carriage riding, bag lifting and practice riding, other types of horses were typically used.

Destriers were reserved specifically for tournaments and battles. This allowed the trainers to spend a lot of time with Destriers, perfecting them for combat situations. At the other hand, this allowed the Destrier horses to avoid menial tasks and be perfectly fit and strong for use when the occasion arose.

Size of a Destrier War Horse

Medieval sources offer many exaggerated accounts of the overall size of a typical Destrier horse. Recent researchers and archaeological evidence provides definite data on this front. According to recent researches, war horses such as Destriers probably ranged from 14 to 15 hands in height.

Drawing from the proof of medieval horse armours, other researches have confirmed this, further elaborating that at a maximum, the height of a Destrier probably rose to 16 hands. The size of a Destrier, then, was not unusual compared to a regular riding horses, and the Destrier stood apart only on account of its agility, strength and intelligence.

Price of a Destrier War Horse

The price details regarding a typical Destrier horse, as provided in different medieval sources, are a key indicator of the worth of this specific type of war horse.

According to the medieval Salic law, for example, the price of a typical mare was 3 solidi but that of a Destrier was as much as 12 solidi.

So a 7th century Destrier was valued at four times the price of a regular mare. This disparity increased even further in later times. A 13th century source, for example, reveals that the price of a single Destrier as used by the knights was seven times that of a usual horse. 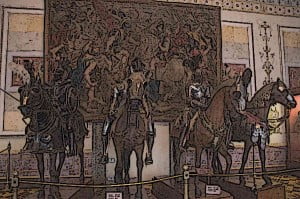 According to medieval sources, the Destrier horse was not found in England until the 11th century.

Destrier use in England

According to medieval sources, the Destrier horse was not found in England until the 11th century. It was William The Conqueror who brought this specific type of horse with him to England and from this time onwards, the breed became popular with the richest knights who could afford to purchase it.

The mares used by the Moors in medieval times and the stallions more popular in Europe were considered equally capable war-horses, almost comparable to the Destrier.

A Destrier horse was typically quite intelligent, being able to understand his rider’s commands and respond to them accordingly. For instance, a Destrier was trained to inflict damage and injury on the enemy in the battlefield and a Destrier was trained to spot and sense an enemy for this purpose. It could bite or kick on the command of its rider and usually moved with extraordinary agility by making use of its very powerful hindquarters.

The Destrier was a specific type of horse used in medieval times. It was typically used as a warhorse and during jousting competitions. A Destrier was extensively trained for these purposes and was never used for other tasks such as regular riding or in hauling carriages.

Typically, a Destrier rose to a height of 14 to 16 hands, had a short back but a very strong hindquarter and was very agile. It was able to move rapidly and respond to a knight’s commands by putting its weight on hindquarters.

Compared to regular horses, Destriers were highly valued in medieval times and were esteemed at many times the value of a normal horse. Moreover, they were fairly rare and only a few knights used them during wars. Towards the 17th century, this specific type of horse became extinct.