The history of The Scavenger’s daughter can be traced to the reign of King Henry VIII of England. The device is said to have been invented by Lieutenant of the Tower of London whose name was Leonard Skeffington. The term “scavenger” is actually derived from the last name of the Lieutenant. However, documents from the medieval times have revealed that the device was rarely used and was thus one of the less used medieval torture devices. 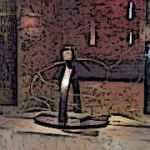 Scavenger’s daughter by definition was a kind of torture device that compressed the body of the victim in painful proportions. This was the opposite torture compared to the famous Rack where the victim’s body was stretched and limbs torn apart. The torture of compressing the body of the victim was used to obtain confessions of the crimes and this was considered a completely legitimate way of getting confessions.

How did a Scavengers Daughter Work?

The Scavenger’s daughter worked by strapping the head of the victim to an A-frame shaped metal rack at the top point of A. The hands were then tied at the midpoint and the legs at the lower spread end of A. Then the body was compressed from both side pushing the knees up in a sitting position and the head in the opposite direction. This resulted in blood running from the nose and ears of the victim other than damage to muscles.

How was a Scavenger’s Daughter Made?

The Scavenger’s daughter was relatively easier to make compared to many other torture devices. A metal frame was constructed using three iron planks in an A shape. Additionally, straps were used to bind the victim to the device. This was one of those medieval torture devices that were easy to make. 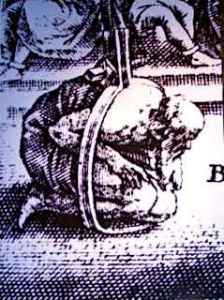 The Scavenger’s daughter was among those medieval torture devices that were rarely used and were relatively easier to make. The device was invented in England during the reign of King Henry VIII. It worked on the opposite principle of the Rack since the victim’s body was compressed instead of stretched on the Scavenger’s daughter. It consisted of an A-shape metal frame to which the victim was tied and then compressed from both sides, resulting in bleeding from nose and ears.