Vlad the Impaler, whose real name was simply Vlad III, was prince of Wallachia who lived from 1431 to 1476. His father was a member of The Order of the Dragon and was engaged in wars and skirmishes with the Turks who were constantly invading the Balkans from the East during that time.

His cognomen “The Impaler” became famous from this practice of impaling his enemies and the reputation became widespread during and after his lifetime.

He is also known to be the inspiration for the leading character of Bram Stoker’s famous novel Dracula, although modern scholars have disputed this previously accepted detail. 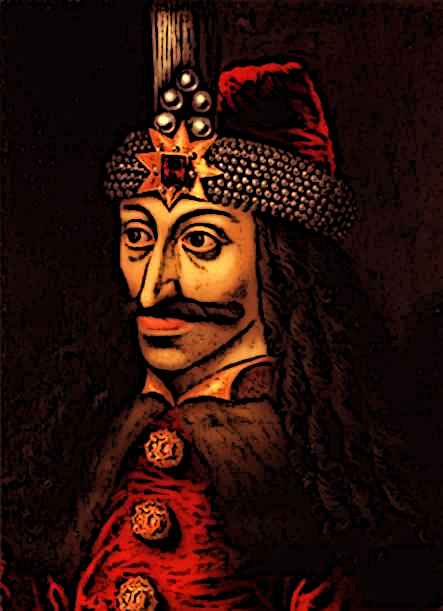 Who was Vlad the Impaler

Vlad the Impaler was born in the Kingdom of Hungary in 1431 and his father’s name was Vlad II Dracul.

During the same year, his father was induced in the famous Order of the Dragon which was established to protect Christianity in the Eastern Europe against the invasions of the Turks, which were common during the late medieval times in Europe.

At the age of 13, Vlad the Impaler, along with his brother Radu, was taken by the Turks as political hostage and spent a few years in captivity, during which time he was taught the Turkish language, literature, logic, and Quran.

His later sadistic tendencies are believed to have been formed during his years in captivity, even though he did not face any cruelties and his brother Radu eventually ended up embracing Islam.

Vlad the Impaler had a reputation for cruelty and sadism which became widespread during and after his lifetime.

For instance, according to a German pamphlet from 1521, he roasted children who he then fed to their mothers.

Also, he cut off the breasts of the women and forced their husbands to eat them. Finally, he impaled the captured prisoners. His method of impaling was to force the victim to sit on a sharp and thick pole which was then lifted upright with the victim slowly sliding down by his own weight.

The method was very slow and sometimes the victim would take as many as three days to finally die. It is believed that he impaled more than 20,000 people during his lifetime.

In 1459, a new crusade was launched against the Turks as per the dictates of Pope Pius II.

Hungarian prince Matthias Corvinus was to play a central role in this crusade so Vlad the Impaler joined him to save Wallachia from the Turks.

In the same year, Vlad the Impaler killed the members of the Turkish envoy which was send by the Sultan in order to collect the tribute which had been delayed.

As a result, the Sultan sent his commander Hamza Bey with 1000 men to avenge this incident. However, Hamza Bey and his men were defeated by Vlad the Impaler in an ambush and were impaled with Hamza Bey impaled on the highest stake.

He subsequently clashed with Matthias Corvinus because of the latter’s wish to have more influence in the Central Europe.

As for his death, there are various versions, although it is generally believed that he was finally killed in a battle with the Turks.

Bran Castle in modern day Romania is generally believed to be the castle of Vlad the Impaler, although this assertion is often disputed.

The castle is located on the border between Wallachia and Transylvania and is also known as “Dracula’s Castle”.

It was originally built in 1212 by the Teutonic Knights but was destroyed by the Mongols in 1242. However, Louis I of Hungary had it rebuilt in 1377.

Subsequently, the castle was used in defense against the Ottoman military and also served as a customs post between Transylvania and Wallachia.

While the castle is often associated with Vlad the Impaler, he does not seem to have settled there permanently at any point in his life.

However, he passed form there several times and must have stayed in the castle for short duration.

It was a widely held belief that Vlad the Impaler was the inspiration for the character of Dracula in Bram Stocker’s 1897 novel of the same name, since both of them had a taste for blood and sadism and there are also commonalities between the names.

However, various modern historians and scholars have disputed this belief. For instance, Dracula scholar Elizabeth Miller in his book Dracula: Sense and Nonsense details the history of Dracula scholarship and refutes many theories and misconceptions that were previously prevalent.

The connection between Dracula and Vlad the Impaler was established during the second half of the twentieth century, particularly after the publication of In Search of Dracula in 1972.

However, years later, the writers of the book, McNally and Florescu stepped back from the claim that was made in the book, although the belief continues to have popular sway.

There are various versions about the death of Vlad the Impaler.

It is generally accepted that he died in 1476 during a battle against the Turks. However, the exact circumstances of his death remain unknown to the day, and different versions exist.

According to one version, he was killed by his Wallachian boyars who betrayed him in a war against the Turks.

According to another version, he was captured and decapitated by the Turks and his head was eventually sent to Constantinople where it was displayed on a stake.

However, exact circumstances of his death remain highly ambiguous and all that is known for sure is the year of his dead and his battle with the Turks.

Vlad the Impaler continues to live in the popular imagination mainly because of his extreme cruelty and his novel methods of torture.

Various tales about his cruelty, with considerable variations, exist throughout Europe.

Romanian and Bulgarian documents following his death also portray him as a hero and a leader who only used cruel methods in defense of his country.

Through Bram Stoker’s novel Dracula, to which the character of Vlad the Impaler has become associated, he has become entrenched in the popular imagination.