Burning people alive was one of the most common ways of punishing blasphemers, witches and heretics in medieval Europe.

Usually deemed as burning at stake, the punishment was a public spectacle where large number of people would turn up to see the victim in question being burned.

Typically, the victim died of asphyxiation far before the flames could damage the body enough.

Burning people alive was a popular mode of punishment during the Spanish Inquisition and it was used to punish some of the most prominent names in medieval Europe, including Joan of Arc. 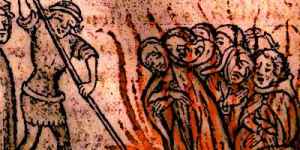 Byzantine Empire which was carved out from the Eastern portion of Rome, was the home of Christianity during the early medieval period.

Many religious punishments enacted in the Byzantine Empire involved the burning alive of the culprit.

Notable among these was the crime of parricide, or the killing of one’s relatives.

Any Byzantines who were found guilty of this crime were immediately sentenced to be burned alive.

Similar punishments were decreed for heretics, although they were not often enacted.

Laws Regarding Death by Burning

In the medieval ages, Europe saw a number of rulers and religious leaders pass laws concerned with burning criminals of certain offenses.

These laws officially legalized the punishment of burning people alive.

Pedro II of Aragon decreed the punishment of burning alive for heretics in 1197. The law passed by the Holy Roman Emperor Frederick II in 1224 officially decreed a similar punishment.

In Sicily, the punishment of burning alive became a law in 1231.

In France, Louis IX promulgated a similar law in 1270.

England saw a long period during the 15th century when it became common to punish purported heretics and dissenters with the punishment of being burned alive.

Burned Alive – The Burning of Jews in Medieval Europe

Numerous incidents of the mass burning of Jews throughout Europe are recorded in medieval ages.

Jews were burned alive on charges ranging from blood libel to the poisoning of wells and more.

One of the earliest of these notorious burning took place in 1171 when 51 Jews were burned alive in Blois.

The entire Jewish community suffered a similar fate in Beelitz in 1243.

The burning of the Jews saw a resurgence in the 14th century with the arrival of the Black Death in Europe. Jews were accused of poisoning the wells and thus spreading the plague.

Although the Knights Templar were directly created and overlooked by the Pope, eventually radical disagreements arose between the Order and the French King.

This rift developed further when Pope was unable to reconcile the King with the Order.

Eventually, a sudden decree brought a charge of heresy against the Knights Templar.

Many members were arrested and more than 50 knights of the Order were burned at the stake on the aforementioned charges. 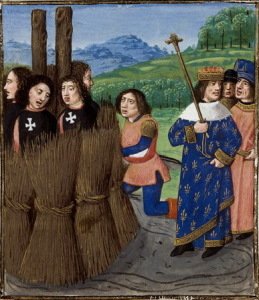 Death processions were common in medieval Europe for such persons who were condemned to be burned alive over charges of heresy.

Such a person was first publicly roamed in the streets with a rope around his neck and accompanied by the executioner.

He made a stop at the church, confessed his sins, and was then walked to the site of his actual burning.

In most cases, a large crowd followed close on the heels of such condemned persons and then stood by while he was burned alive for his alleged crimes.

The Methods of Burning people alive

Typically, a tall pole was erected when a person had to be burned alive.

The pole was usually available at the official site of execution.

The condemned person was stripped of his clothes and forced to put on a shirt covered with sulfur.

He was then tied with ropes to the pole and a pyre of woods was built around him so that there was a small gap left between him and the pyre.

After he was tied to the pole, this small gap was filled with straw. Finally, fire was lit to the straw on all sides of the pyre to begin the execution process. 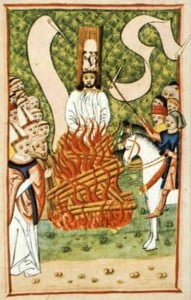 Burning alive was considered a dire punishment for crimes which were considered serious in medieval Europe.

Consequently, the sheer pain inflicted in the process of being burned alive was considered an atonement for the person who committed these crimes.

Death by burning came in varying degrees of pain. Some condemned persons had to suffer a long and very painful death as the fire was manipulated to continue slowly and delay the ultimate death.

In other cases, a quick death was coupled with the punishment of burning so that the person in question was either strangled before being burned, or he was pierced with an iron bar through the breast as soon as the fire rose high around him.

This was considered a merciful version of the punishment.

Notable Persons Burned at the Stake

Although the punishment of burning at the stake was mostly applied to common people, many notable persons were also condemned to such a punishment during medieval times.

One of the most notable among these was Jacques de Molay, the last Grand Master of the Knights Templar who was condemned to being burned on a scaffold.

A notable early Christian reformer, Jan Hus, was a precursor to the Protestant Movement.

He was burned at the stake on the charges of heresy. Joan of Arc, the noted French heroine of the 15th century was also burned alive after the English captured her.

Being burned alive, or burning at stake, was one of the most common punishments in medieval Europe associated with the crimes of heresy and blasphemy.

This mode of punishment was particularly common in purported crimes related to religion.

Throughout medieval Europe, Jews were burned alive in many instances on trumped up charges, most notably during the onslaught of the Black Death.

Witches, heretics, dissenters of the Church and any other persons who presented ideas at odds with the Church were frequently condemned to be burned at stake.