The Brank’s or Scold’s Bridle Torture device was a type of metal cage or mask that was fastened around the victims head.

The Brank’s was made from metal probably iron and often had various additions to it depending on the medieval period or location, for instance sometimes bells were attached to the back of the Brank’s torture device so that attention would be brought to the victim who would be subjected to verbal abuse, spitting and worse, from the people of a medieval town or village.

The Brank’s was considered a Soft and mild form of punishment in medieval times, but I am sure that people of today’s world would disagree with these opinions.

The Brank’s Torture device could be described as a mask, helmet, muzzle or cage all these descriptions are accurate.

The Brank’s was also known by many names depending on the location and period it was used, common names that are also recognized are the “Scold’s Bridle” and “Gossip’s Bridle”. 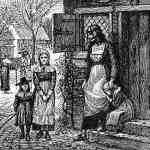 Purpose of The Branks

The purpose of the Brank’s was to punish the victim through slow torture and humiliation at the same time!

victims would find it unbearable to have a heavy metal mask on their heads and it would drive them crazy with frustration.

The Brank’s torture device left the victim in a vulnerable position especially as it was mainly used on women.

Crimes that led to Branks torture Device being used

The Brank’s was used in cases of minor crimes in fact most of the “crimes” that led to the Brank’s torture device being used wouldn’t even be considered crimes in today’s world.

It was basically unpleasant behavior that led to the use of the Brank’s torture device, things like breaking the peace, being of a public nuisance, being drunk and disorderly, effectively any behavior that caused offense to others.

This also including some forms of gossip like lying, offending others and hurling insults at others were all deemed worthy behavior of punishment using the Branks torture device.

The Branks torture device was also used for cases of witchcraft and criticism of religion for which the punishments would probably be much more severe than for something like nagging ones husband!

The Brank’s or Scold’s Bridle was often used for minor things like gossiping or Scolding too much hence the name “Scolds Bridle”, where the first word depicts the crime and the second part describes the helmet “the Bridle”.

The Brank’s of Scold’s bridle was also used on Quaker women who were caught preaching in public places which was not allowed. 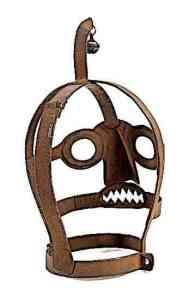 An Iron Branks or Scolds Bridle without the tongue piece fitted

Fitting of the Branks Torture Mask

The Brank’s torture device could be fitted for any length of time anything from a few hours, a few months and also permanently if it was the intention to kill the victim.

This could depend on the seriousness of the “crime” but could quite as easily be determined by mind set of the person administering the punishment as the rules on crime and punishment was often vague and unfair in medieval times.

It was also a serious crime for a victim to remove the Brank’s torture mask, and a worse punishment would be administered for this act, which would lead to a worse torture punishment or even a sentence of death could be applied.

There were many variants of the Brank’s torture device, different designs and additions were made to the device throughout it’s history and there were no rules or regulations.

The only restrictions were the cruel imaginations of the person designing the Brank’s which were usually made by medieval Blacksmith’s to the stipulated design.

Popular additions to the Brank’s Torture Mask were bells that brought attention to the victim and sometimes spikes were added to an iron curb-plate that inserted into the mouth of the victim and pressed down against the top of the victim’s tongue.

Spikes added to the mouth area of the Brank’s would hurt the victim as they spoke, penetrating the tongue and other parts of the mouth.

History of The Branks Torture device

The exact date of the original use of this type of Scold’s bridle or Brank’s torture mask is almost impossible to date and similar types of device were probably used in ancient times, however we know that devices of this type were used in medieval times.

Much later records of it’s use for example in 1567 it was used for slander against Bessie Tailiefeir who was punished with the Brank’s and the Cross for accusing Baillie Hunter of using false measures which he may or may not have been doing.

The last recorded use of the Brank’s Torture device was in 1856 in a place called Bolton le Moors in Lancashire.