During the medieval times in Europe, various cruel torture devices were invented for different purposes. Most importantly, these devices were invented and improved upon when the institution of Inquisition was in full force during the late medieval times. Some of the most brutal torture devices used during this period include Brazen Bull, Scold’s Bridle, Rack, Chair of Torture, Pear of Anguish, Breast Ripper, and others. One of the most brutal and most commonly used devices was called Judas Cradle which was also known by the alternate names of Judas Chair and the Guided Cradle.

What was the Judas Cradle Torture Device

Judas Cradle consisted of a pyramid shaped wooden device and the victim was placed on the top of the pyramid. His or her hands and legs would be tied so that the weight could not be shift elsewhere. The feet were actually tied with each other with the purpose of increasing the pain whenever there was a movement of feet. The pointed edge of the pyramid was slowly inserted in the anus or vagina of the victim and the torture could continue from a few hours to entire days. The time, however, also varied from victim to victim depending on various factors other than their own ability to bear the pain. For instance, sometimes a weight was added to the victim’s legs which increased the pain but also resulted in quick death. Other times, oil was put on the device which again increased the pain. 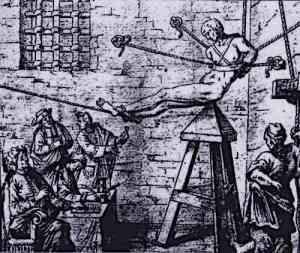 There were generally multiple torturers who operated Judas Cradle. One of them would usually be in charge of the affairs with the rest assisting him. The device was invented in the 16th century Spain when the institution of Inquisition was widespread and new and brutal techniques of torture were being devised. The torturers were given specific amount of money as their fee and their main task was to extract the required information from the victims.

What Medieval Period was the Judas Cradle Used

Judas the Cradle began to be used during the 16th century Spain after the institution of Inquisition was established in the country. Thus it was during the late medieval times that the device was most commonly used. Although mostly used for religious purposes, it was also used against the political opponents of the time. Another device very similar to Judas Cradle was also in vogue in Prussia but its purposes to discipline the wayward soldiers. This particularly device was simply known as “horse” and was specifically designed to cause damage to the genitals.

Variations of the Judas Cradle

Various innovations were used to make torture on Judas Cradle more painful. To being with, the device was never washed which made it all the more dangerous and infectious. This meant that the victim could face deadly infections even if he or she managed to survive. Among other methods, the victim was made to repeatedly fall on the pyramid to immensely increase the pain. The most common way to increase the pain, however, was to simply add weight to the legs of the victim. Sometimes the victim was raised with the ropes and given monetarily respite, but this was not done out of mercy but only to prolong the pain and misery of the victim.