The Black Death in Europe 1347

What was the Black Death?

The Black Death was a pandemic that raged in medieval Europe and was one of the most devastating catastrophes in known human history.

The outbreak of the pandemic began in 1346 and continued all the way until 1353.


History of the Black Death in Europe 1347

The Black Death was a devastating global epidemic of bubonic plague that struck Europe and Asia in the mid-1300s.
The plague arrived in Europe in October 1347, when 12 ships from the Black Sea docked at the Sicilian port of Messina

During these years, it spread throughout Medieval Europe and took a toll of more than 100 million lives.

In all, it is believed that Europe lost 30% to 60% of its total population as a result of the pandemic.

Apart from inflicting extraordinary loss of lives, the plague also left significant and permanent marks on the social, political and economic outlook of Europe.

The plague itself is believed to have originated in China and to have traveled from there to Asia.

It was then carried, by the Mongol armies according to some historical accounts, to the city of Kaffa.

From Kaffa, the plague traveled via Genoese traders to Sicily. It then spread to southern Europe and soon spread all over the northern Europe as well.

By 1350s, it had traveled to regions as far as Sweden, Norway and Russia in the north of Europe.

The plague mostly spread as a result of the trading between European nations and was often carried through trading ships. Consequently, nations which didn’t have a huge volume of trade with other European nations suffered comparatively less. The Kingdom of Poland is an example.

Black Death in Europe and Religions

The urban centers all over Europe suffered heavily and lost a huge number of inhabitants to the plague.

According to modern estimates, Europe lost nearly 50% of its population in less than ten years due to plague.

Due to the inability to combat the plague or to understand its origins, the common population in Europe took to religion with renewed fervor.

The minorities faced the suspicion and wrath of the Christian population who deemed them responsible for what they saw as the scourge of God.

Many groups such as Jews, Romani and others were widely persecuted as a result. 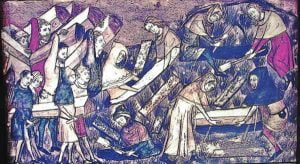 Impact of the Black Death in Europe

The Black Death instilled a new passion for religion, superstitions and the supernatural.

Most Medieval European countries closed their economics and diminished the volume of imports and exports in a bid to mitigate the outbreak of plague.

The plague had a very notable effect on the peasant population. Due to heavy loss of population, peasants were high in demand after the Black Death. Consequently, they enjoyed better wages and favorable working conditions compared to the time before the plague.

Similarly, workers in urban centers also enjoyed better wages in the wake of the plague and could demand more rights.

After the plague’s outbreak ended, the population had greatly diminished and more resources were available to the survivors. This contributed significantly to better and more lavish living conditions on average, better food availability.

Another interesting outcome of the plague was the regrowth of wild and natural vegetation in vast areas of Europe since the population required to cultivate them was no longer available.