King Eadred ruled the England from 26 May 946 – 23 November 955. He was the son of Edward the Elder and was the younger brother of Edward I.

His mother Eadgifu of Kent was the daughter of Sigehelm, Ealdorman of Kent and third wife of this father, Edward the Elder. 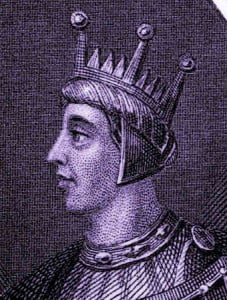 Northumbria was completely under the control of King Eadred in the initial part of his rule as the Scots had promised their full support to the King and took an oath that they provide whatever the King would need. However, in the near future the King faced many challenges in the north, especially from two Scandinavians who declared themselves as the Kings of Northumbria.

King Amlaíb Cuarán also known as the Óláf Sihtricson was the godson of Edmund and was the King of Northumbria especially in the initial part of 940s. He was deposed from the Kingship, but soon he succeeded his cousin as the King of Dublin.

He would remain in power for a long time but he faced a heavy defeat in a battle in 947. He kept trying and was successful in regaining the Kingdom of York. King Eadred honoured his brother’s godson and tolerated his presence to the full.

Eric ‘Bloodaxe’ challenged Eadred by declaring himself as the King of Northumbria. Previously, he had been the King of Norway. Eadred did not take this thing lightly and attacked his warriors in Northumbria with his full force.

Eadred forces burned the Ripon monastery. During the Battle of Castleford Eadred’s forces faced heavy loses and Eadred had to retreat back, but he assured Eric’s supporters that next time he would come with a greater force and threatened them. These threats had a positive effect as Northumbrians agreed to pay some compensation and this appeased the King Eadred.

King Eadred’s last days of life were very tough as he suffered from a serious digestive illness. He could not eat anything solid and used to chew everything and then spit it out. He could only intake the juices of the food.

The disease proved to be fatal one and King Edward died on the St. Claimant’s day, i.e. 23rd November 955 at Frome, Somerset. His burial took place at the Old Minster at Winchester. As the king never married so had no heir to the throne. As a result, Edmund’s son Eadwig succeeded him.

King Eadred (946 to 955) was an early ruler of england, Northumbria was totally controlled by King Eadred in early medieval times