A medieval nun by definition was a member of female religious order who was bound by certain vows that acted as requirements of the order. These vows for a medieval nun included poverty, chastity, and obedience. Other than serving other human beings, medieval nuns also led lives as ascetics in monasteries or convents.

Purpose of a medieval Nun

The purpose of a medieval nun was twofold. She could either lead her life in the service of other human beings or she could simply lead her life in constant prayer and contemplation in medieval monasteries and convents. In either case, the vows of poverty, chastity, and obedience were applicable. 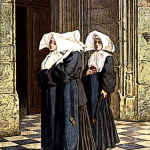 Medieval Nuns chatting in the portal of a church

The status of a medieval nun during the medieval ages was higher than ordinary women, although not higher than the women of nobility. During the middle medieval times, the cult of the Virgin Mary became popular which asserted the high status of women because it was a woman who gave birth to the son of God. Thus a medieval nun commanded considerable esteem and respect.

A nun’s habit was the most important component of the clothing of a medieval nun. The Benedictine Nuns used white or grey habits but with the passage of time, the black colour became predominant. The habit was tied around the waist with a cloth or a leather belt. A medieval Nun also wore a scapula which was a piece of woolen cloth worn over the soldiers. Other garments used in the clothing of a medieval nun included a wimple and veil attached to scapula and a crucifix around the neck. 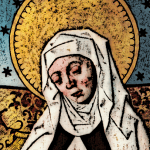 Where did a medieval Nun live

Just like the religious monks, women who devoted their lives to God’s work were called medieval nuns. Nuns were bound by the vows of poverty, chastity, and obedience and spent their lives in community service, prayer, and meditation. Other than these obligations, their daily lives also included various chores such as cooking and washing. The Black robe was known as nun’s habit and was the common dress of a medieval nun.