A medieval bishop was someone who enjoyed considerable authority in the hierarchy of the Church.

During early Christianity, bishops sometimes acted as the leader of the local congregation but during medieval times, he assumed a position of authority and did not serve individual congregations.

Instead, he would generally appoint priests to serve congregations. The priest in such cases would act as a delegate of a medieval bishop.

What were a Bishops Duties

A medieval bishop enjoyed considerable power and prestige and even the king would consult him about important matters. Other than the responsibilities of consultation with the king about the affairs of the state, a medieval bishop was responsible for a diocese which was composed of deaneries headed by various deans or priests. He listened to the requests of the priests and the clergymen, levied taxes on the peasants, and looked after the spiritual matters of his diocese. 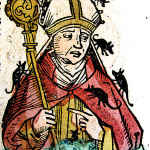 Drawing of a Medieval Bishop

Daily Life of a medieval Bishop

A medieval bishop belonged to the nobility and as such lived a luxurious life. He would have a special position in the king’s court and his daily life included attending the council where he was consulted by the king. Sometimes they would visit churches and parishes around the country and listen to the requests of the clergymen. His daily life was thus spent in administering the matters of his diocese in addition to attending councils with the king.

Where did a Bishop Live

Bishops status in the Clergy

In the hierarchy of the Church, there was one Arch Bishop after the Pope and Cardinals. After this came the priests, monks, and nuns. Thus the status of a medieval bishop was quite high in the hierarchy of Church and this made him a very powerful individual. Sometimes, even the kings would be obliged to consult the bishop about the matters of the state. A medieval bishop would thus lead a life which was nothing short of the life of aristocracy. 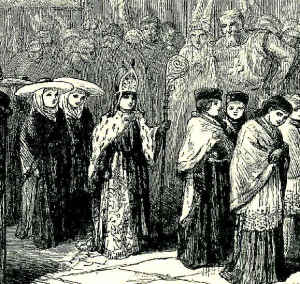 A Boy has become a Medieval Bishop

Clothes of a Bishop