Chivarly Defintion According to- Google

The word Chivalry itself comes from the French word chevalier (‘cavalier’),

Chivalry always had it’s origins in the ‘warrior class’ and it is medieval knights who are most recognized as being linked with ‘Chivalry’ with the ‘Code of Chivalry’ that
would come to control a knights conduct in battle and society.

Chivalry in Europe started in Northern France – France was one of the most powerful and advanced nations of the middle ages and it is therefore no surprise that chivalry started there!

It was in the 12th Century around that the idea and concept of chivalry began to take off – the 12th century is the time period between 1101 – 1200 and this
period is commonly named by historians as the ‘High Middle Ages’. 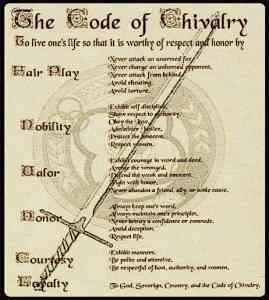 Beginnings and Endings of Chivalry

It is hard to pin-point and exact date when chivalry started but historians suggest that it was around the middle of the 12th century, from this point chivalry was being
practiced until the end of the Middle Ages.

It is widely accepted that the medieval period finished towards the end of the 15th century – so the decline and ending of chivalry and particularly ‘Knights and the Code
of Chivalry’ was becoming less important and declining during this time.

Chivalry began as a kind of early set of standards, ‘ethics’ or ‘rules’ for the ‘warrior class’ – knights usually had a good standard of living, being given land holdings and other
favors, in return they provided a ‘military service’.

The ‘new codes of chivalry’ would give a good set of rules ‘standards’ in how knights were expected to conduct themselves in medieval society on and off the battlefield!

Chivalry began because the ‘warrior class’ needed a set of standards for how they should behave from a militaristic stand point and from here it progressed and incorporated
values of gentility, nobility and treating others in a gentle way and how one would like to be treated themselves.

Martial exercise and military virtue remained integral to chivalry right until the end of the middle ages!