Migration period art refers to the body of art produced by the migrating Germanic tribes from the early 4th century to the 10th century. During this period, the Germanic tribes in the north and east of Continental Europe spread out from their homelands to all of Europe.

Their migration activity precipitated the fall of the Roman Empire and reshaped the entire continent into new political units. Germanic tribes originally adhered to pagan beliefs and pagan elements are manifest in early migration period art.

Once these tribes gradually Christianized, their art also morphed by mixing together pagan elements with new Christian themes. The fact of migration, the wars it led to and the settlement in new places, all contributed as major themes in the migration period art.

The polychrome style of art developed among a portion of the migrating Germanic tribes during the early period of migration. The origins of this style can be traced back to the Germanic tribes who originally arrived from Eastern Europe and had been exposed to the art of Asian regions as well.

Germanic Goths most notably made use of the polychrome style which involved using objects made of stone and richly adorning them with precious stones. The Goths, once they spread into Italy and Spain, took the art form with them to these regions of Western Europe. By the 5th century, the polychrome style was popular among the Germanic tribes through most of Western Europe.

During the migration period, the Germanic tribes carried this art form to Northern and Eastern Europe including England and Scandinavia. 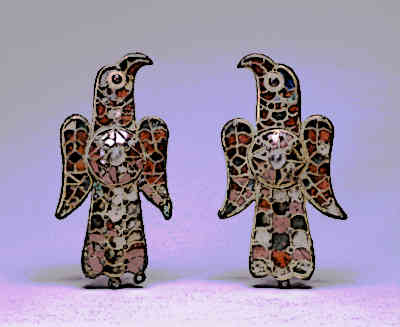 The Germanic Anglo-Saxons settled in Britain in the 5th century. Their consequent interactions with the Celtic culture to the north of the British Isles led to the development of Insular art.

Insular art combined pagan elements and styles of Germanic and Celtic cultures with the religious themes of Christianity. Most notable examples of this type of migration art include illuminated manuscripts dating from 6th to 9th centuries. Intricate and fine metalwork also developed as a unique medium of art as a result of this fusion on British Isles.

Mixture of Germanic and Christian Art

Soon after their arrival in Western Europe during the migration period, the Germanic tribes came into contact with Christianity.

This led to the gradual conversion of Germanic tribes to Christianity which became a vital source of identity for these tribes. Consequently, the art of these tribes also absorbed Christian and Biblical themes, often mixing them with pagan themes.

A very notable result of the Christian influence on Germanic art was that this led to the erosion of indigenous styles of art and led to a sort of standardization whereby Mediterranean influences were adopted into Germanic art.