Edward the confessor ruled England from 8th June 1042 to 5th January 1066. He was the second last Anglo-Saxon King and is considered as the last king from the House of Wessex. He was the son of King Æthelred the Unready and Emma of Normandy, who was the daughter of Richard I, Duke of Normandy.

Edward succeeded his half-brother and king Cnut the Great’s son, Harthacnut. With him assuming the powers of King, it ended Danish rule and restored the rule of the House of Wessex. He had no children. Harold Godwinson succeeded King Edward. 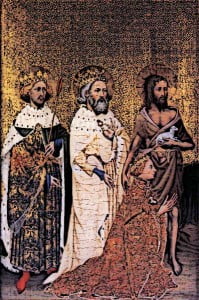 King Edward the Confessor was the seventh son of Æthelred the Unready. His mother was Emma of Normandy who was second wife of Æthelred. During his childhood he witnessed the raids and Viking invasions by Sweyn Forkbeard and his son Cnut. In 1013, Sweyn seized the throne and as a result, Edward’s mother Emma fled to Normandy.

Soon Edward and Alfred, and then Æthelred also fled to Normandy. In February 1014, Æthelred returned to the throne following the death of Sweyn. Æthelred died in 1016, succeed by Edward’s half-brother Alfred Ironside, who kept fighting Swey’s son Cnut. Edmund died in the November of same month and Cnut became King. Edward again went into exile and his mother Emma married Cnut in 1017.

Why King Edward was called the confessor?

King Edward was called the confessor to differentiate him from the King Edward the Martyr and due to his reputation as a saint who did not embrace martyrdom.

After Harthacnut’s death, Godwin, the most power English earl, supported Edward. Edward thought that his mother did not do enough for him so he decided to deprive her of any property and treasure. Edward’s initial position as a King was weak, but he took necessary steps to restore the traditional power of the Monarchy.

Edward had no intentions of creating a personal power base and in 1050-50 he reduced his navy fleet and paid off the foreign ships, and he abolished the tax required to pay for these ships.

Westminster Abbey was the first Romanesque church of in England was the major building project during King Edward’s rule. It was commenced between 1042 and 1052, consecrated on December 1065 and completed in 1090 after the death of King Edward.

In the last days of his life, King Edward had become very weak. It is believed that Edward had entrusted his Kingdom to Harold and Edith shortly before he died. He died on 5th January 1066 and was buried in Westminster abbey the next day. Harold Godwinson succeeded him as the king.