King Harthacnut ruled England from 17th March 1040 to 8th June 1042. He was also the King of Denmark from 1035 to 1042. Harthacnut was the son of the King Edward the great and Emma of Normandy, and was the half-brother of Harold Harefoot and succeeded him after his death.

After the death of King Cnut the Great, Harthacnut was the rightful heir to both English and Danish thrones but he struggled to control all the territory and was busy in defending Denmark and this is the reason why his half-brother Harold Harefoot succeeded Cnut the great before him in England in 1935. 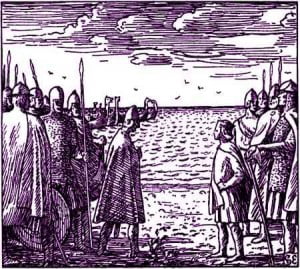 Harthacnut was the son of “Cnut the Great” from his second marriage with Emma of Normandy and it is believed that King Cnut had assured Emma that any sons from their marriage would take priority over the son of his first marriage with Ælfgifu of Northampton cast aside.

So Harthacnut was given special treatment as soon as he was born. Harthacnut was also brought to the fore by his father in 1020s when Denmark was threatened by the Norwegian and Swedish forces

King Harthacnut, after the death of his half-brother Harold, landed in Sandwich, England on 17th June 1040. He was accompanied by his mother and had a fleet of 62 warships.

Although he was offered the throne, he had prepared well for any unforeseen calamities on his arrival and that’s why he arrived with a war like fleet ready for any situation that could arise.

Now in order to reward and pay the crew, Harthacnut levied a geld (Tax) of 21000 pounds that made him unpopular on immediately throughout the country.

English kings in the past had ruled in council with advice from nobles, but Harthacnut decided to adopt an aristocratic style, He had no faith in Earls, so he doubled the size of the English fleet to counter any insurgency within his Kingdom.

In order to maintain this fleet he doubled the size of taxes paid as well and introduced a punishment known as ‘harrying’ in order to counter any none tax payers.

Harthacnut’s mother wanted revenge for Harold’s murder of Alfred and in order to appease her, he passed an order to disinter Harold’s body from its place at Westminster and to publicly behead it. Afterwards Harold’s body was disposed of into a sewer and then retrieved and thrown into the Thames.

King Harthacnut was suffering from serious disease, probably tuberculosis, even before he was declared king, his situation was worsening and he knew that he would not be live for long.