The Gutenberg Press was a type of press envisioned by Johannes Gutenberg in 1436. He had been a skilled goldsmith and had extensively worked with different types of metals.

In 1436, he decided to make use of the previously available and traditional screw press and combine its prowess with new pieces of equipment that he himself invented.

The result was the creation of what was later called the Gutenberg Press, essentially a precursor to the modern printing press. His invention ushered in a new era of printing which directly aided in the greater availability of different books and texts. 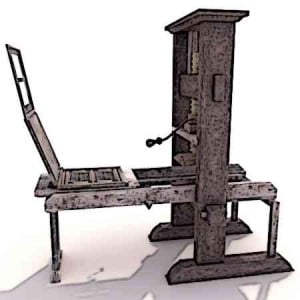 Gutenberg innovated on this method by first creating a special type by using lead, tin and antimony in an alloy. This type offered a far more durable print than previously available types.

Gutenberg also invented a special matrix which enabled the operator of the press to quickly rearrange the letters on the template and get them to print. This matrix made it possible for the new press created by Gutenberg to significantly speed up the printing process.

Another exceptional achievement of Gutenberg in creating the press was the use of a new oil-based ink, as opposed to the water-based ink which was previously used. Oil-based ink was more durable and offered a more solid and clear print.

Europe was on the verge of discovering its rich Greek and Roman heritage at the time when the Gutenberg Press was invented. The Press revolutionised the printing of books and spurred on a movement which would make the printed book no longer a luxury of the intellectual circles and the nobility but a regular part of a common man’s life.

Within a few decades of Gutenberg’s invention, hundreds of printing presses were working all over Europe producing generous volumes of books. The press also made it possible for printers to publish regular journals and newspapers.

Over time, all this contributed to the widespread proliferation of Renaissance ideas, a resurgence of scientific thought and literary activities throughout Europe.

Gutenberg Press and the Renaissance

The Renaissance in Europe was marked by the widespread proliferation of the classical Roman and Greek texts. Until the invention of the Gutenberg Press, such texts were typically available only to the rich nobility who owned the rare copies in their personal collections.

The Gutenberg Press made it possible for such texts to be printed and widely distributed. This is considered a vital factor in the democratisation of knowledge whereby it became possible for a common man to read and discuss these and other contemporary texts.

Such democratisation of knowledge led to a flowering of new ideas. In time, these would lead to the establishment of democracy, the articulation of humane principles emphasising equality and a flurry of intellectual activities throughout the Continent.

Learn More about the Gutenberg Press and the Renaissance at Wikipedia