16 Amazing Viking Facts** You Should Know

Vikings were a Scandinavian people who excelled in seafaring and began raiding different parts of Europe and the British Isles at the beginning of the late 8th century.

Viking raids had a very profound impact on the geography and culture of Europe and in time, descendants of Viking settlers founded the Norman dynasty in England, the realm of Normandy in France and likewise, became ruling dynasties in some other parts of Europe.

Vikings were known for their unique culture, exceptionally swift longships, fierce warfare, swift raiding and many other cultural aspects. 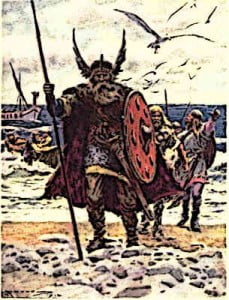 Viking longships were the key to their success. These longships were large enough to carry 60 people, were very swift and agile when traveling in the water and had been designed to make their landing easy and quick.

It was thanks to such ships that Vikings were able to quickly travel to different parts of Europe, raid, plunder and flee. This ultimately gave way to more organized armies carried on multitudes of longships.

Viking religion was polytheistic, comprising of a fantastic mythology and many deities. Among notable Viking gods was Odin, and his sons Thor and Loki. Thor was the god of thunder and an inspiration for Viking warfare. The Viking mythology comprises of many interesting sagas which includes stories about different gods.

Vikings usually cremated their leading noblemen upon their death. The cremation method practiced by the Vikings involved laying down the dead body along with presents such as jewellery and other belongings of the deceased in a boat.

The boat was then set adrift on the water and torched so that it burned to ashes in the middle of the water. Some Vikings also practiced regular burial.

Physically incapable or exceptionally sick children were abandoned by the Vikings.

The Viking would leave such children either to die or throw them into the sea. This was done because Vikings considered physical strength a vital part of the family and society.

Vikings had a body of shock troops which were called berserker’s. Modern researchers believe that the berserker’s probably took psychoactive drugs before going to battle.

They were the fiercest fighters and usually donned on the skins of different animals, also howling like wolves during the fighting.

The British Isles were the chief target of Viking raids. As a result, Vikings had a huge impact on the dynamics of this region.

In the 9th century, Danish Vikings conquered much of England. Although they were eventually pushed back, a different group of Viking descendants, the Normans, conquered England in the 11th century.

Normans then became a part of England and settled down as the new aristocracy of the area. Normans later also conquered Ireland.

Vikings had three social classes. At the top were Jarls, the equivalent of English earls, who were the aristocratic nobility.

Next came the Karls who were free peasants, had their own lands and lived independently.

The third class were the Thralls who were mostly slaved and served Jarls and Karls. Thralls were mostly the slaves that Vikings secured during their raids on different regions.

8 – Vikings and the Afterworld

The Vikings had a concept of heavenly after world, Valhalla.

They believed that godlike entities, Valkyries, carried the heroes fallen in battle to Valhalla where they lived forever.

Such after-worldly notions were important in motivating Viking warriors to gamble their lives during warfare, effectively carving out new regions for their people over the course of centuries.

At a time when ships and naval vessels were still in a rudimentary stage in Europe, Viking longships were capable of traveling up to 200 kilometers per day.

It was due to these vessels that Vikings were able to range as far as modern-day Canada, being among the earliest European explorers to reach the American continent.

Vikings wielded weapons made with metal and crafted them to perfection. The weapons of the Danish Vikings, such as double-edges axes, were so well wrought as to cut through chain main and iron helmets.

When wielded by the strength of a typical Viking warrior, the Viking weapons pierced through most of the defensive armor, and even shields, which were in use back in the 9th and 10th centuries.

Viking mythology, more commonly called the Norse mythology, was heavily steeped in pagan beliefs and had an elaborate cosmic view.

They believed that the cosmos was created as Nine Worlds, all of which were connected by the Norse cosmological tree, Yggdrasil.

The mythology goes on to state creation myths claiming that the world originated from the body of a giant. Viking mythology also predicts wars between gods and their enemies, and the future rebirth of the world.

By the 11th century, Vikings had settled down in different parts of Europe. Normandy in France was settled by Normans, a descendants of Vikings. Similarly, the kingdoms of Denmark and Norway were also established by Viking kings.

A major portion of the Vikings had become Christians by the 11th century. The ruling dynasties in Viking countries of Denmark and Norway had the sanction of the Church, which gave them additional authority and legitimacy in the eyes of the rest of Christian Europe.

Women in Viking society had a lot of rights and privileges. Wives of Norsemen usually had complete control of the household and their husbands had to be considerate of them, so much so that they couldn’t show too many chest hairs in front of them, according to some medieval sources.

Women also had the right to a maintenance payment from their former husband if they chose to divorce him.

Vikings children were considered adults by the age of 12. On average, the Viking males lived into their forties. So as soon as they reached adulthood, the male Vikings would actively start contributing to the society by either going on raiding and warfare, or farming, hunting and doing other chores.

At many raiding targets, Viking would cease their pillaging in return for a sort of tribute payment called Denegeld. Such payment usually comprised of gold payment in return for protection from Viking attacks.