Who were the Moors?

The Moors were descendants of Berber and Arab ancestors. They primarily inhabited North African territories and in the 8th century, crossed the Strait of Gibraltar to begin the conquest of Hispanic kingdom of the Visigoths. Their conquests led to the establishment of a huge Moorish realm in the Iberian Peninsula, comprising of modern-day Spain, Portugal and some other territories at its peak.

The name “Moors” was variously applied through the history to denote people of mixed Berber-Arab descent or people with pure African ancestry. The term was also applied to the descendants of Moors who chose to live in Iberia after Moorish rule in Iberia had come to an end.

Who Were the Moors Quick Facts: 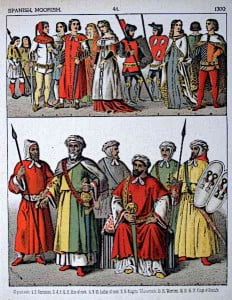 A Moorish army under Moorish military commander, Tariq bin Ziyad, crossed the Strait of Gibraltar in 711. The army confronted the might of the Visigoth army and was able to defeat the Visigoths. This was followed by an eight-year campaign during which the Moors were able to subdue most of Iberia and bring it under their control. This marked the beginning of the Moorish rule in Iberia which lasted from 8th century all the way until the 15th century.

The Moors came of both Arab and Berber descent. However, Arabs were the more powerful element in the Moorish Iberia during the early years of the Conquest. This was primarily because of the fact that the Conquest was undertook, at least formally, under the banner of the Omayyad Caliphate which was mostly Arab in nature.

Consequently, a few decades after the Moorish Conquest of Iberia, Berber Moors felt being sidelined by their Arabic overlords and rose up in revolt in 739. This revolt was one of the earliest instances of civil warfare between Moors in Iberia. The Omayyad stood victorious in this as Abd ar Rehman I, the last surviving member of the Omayyad in Damascus, reached Iberia and after a few decisive victories, subdued the local rebels and founded the Emirate of Cordoba. However, the tension between Arab and Berber Moors continued to exert itself throughout most of the history of Moorish Iberia.

The Moors came of Arab and Berber descent. This gave them a rich cultural heritage from Islams Arab and North Africa. They also borrowed richly from native Visigoth culture of Iberia as well as from Franks in the north and the Byzantine Empire.

The result was a rich and eclectic culture which was a beautiful tapestry of different cultures, most evident in the extant Moorish architecture in Iberia. The Moorish culture also led to a veritable Renaissance in Western Europe which would become the golden age of Islam and later contribute to the European Renaissance.

Who Were the Moors Facts: