Although of English origins, it was in Italy and the neighboring territories that he displayed his real military talents, often successfully leading his mercenary army against a number of foes. He was also noted for continuously switching sides in a way that benefited him and his company, consequently earning him the loyalty of the troops and a vast fortune. Although of humble origins and illiterate, Hawkwood was able to rise to fortune, wealth, fame and power during his long career.

According to unconfirmed historical sources, Hawkwood was briefly employed by the English forces during the Hundred Years’ War and participated in some battles on the English side. However, what is more definitely known is that he later became a part of a number of mercenary companies in Burgundy and traced a mercenary career which soon landed him as the head of the famed White Company by 1360s. He subsequently relocated to Italy together with his mercenary company, frequently taking part in the battles between different Italian cities and Papal factions. 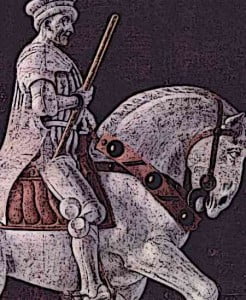 From 1364 to 1387, Hawkwood remained one of the most prominent mercenary leaders in Italy. During this period, he fought for a number of cities and factions. Due to his military prowess, he was frequently paid by factions in battles not to participate or to participate on their side despite payment from the enemy faction.

Hawkwood was able to exploit this to his profit and amassed a vast fortune as well as land estates in Tuscany, Romagna and other places. He fought for Pisa against Florence in 1364 and then against both Pisa and Florence in 1370.

In 1375, he fought for the Papal forces and a few years later, became a part of the anti-Papal league. His expert maneuvering usually brought him even more profit as the warring factions in Italy eagerly sought a battle-hardened mercenary leader like him who commanded a loyal body of mercenary troops.

Although he remained a mercenary through most of his career, John Hawkwood spent his final years in Florentine, offering his military services for the defense of the city a number of times. He led the Florentine army as commander-in-chief in the 1390s and successfully warded off the Milanese threat.

He was subsequently able to defeat the Milanese army and brought the Florence-Milan conflict to an end. In recognition of his services, Florentine granted him citizenship, pensions as well as posthumous honors.