The Moors were people of Berber and Arab descent who mostly inhabited North Africa in the early 8th century. Muslim armies had rapidly marched out of Arabia in the 7th century to reach as far as North Africa by the end of the century. The Arab Muslim consolidated their rule in North Africa by 698.

By the 8th century, the descendants of these Arab Muslim and native North African Berbers made the frontlines of Muslim armies raiding into Iberia. One such army was able to bag a decisive victory in 711 and went on to conquer most of modern-day Spain.

This marked the beginning of the Moorish presence in Spain which would continue to be the case all the way until the end of the 15th century. 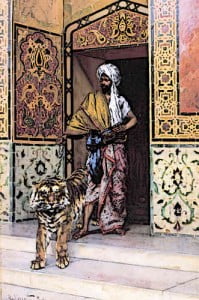 The Moors in Spain Moorish Man with pet Tiger

Arrival of the Moors

At the beginning of the 8th century, most of the Iberian Peninsula was under the rule of the Visigoth kingdom of Hispania. The kingdom had weakened considerably and faced internal instability.

It was at such a fateful time that Moorish commander Tariq bin Ziyad crossed the Strait of Gibraltar in 711 and fought a decisive battle against a sizable Visigoth army. Tariq and his forces stood victorious and went on to conduct an eight-year campaign throughout Hispania which brought most of Iberian under Moorish rule.

Once most of modern-day Spain had come under Moorish rule, it came under the Omayyad Caliphate in Damascus administratively. Subsequent governors and military commanders were then sent by the caliph in Damascus.

This led to discontent within Berber units of the Moorish army leading to a Berber revolt in 739 which sporadically continued all the way until 756.

By 756, the Omayyad Caliphate in Damascus had collapsed and its last surviving member Abd ar Rehman I landed in Spain where he was able to put down the revolts and assume power over Moorish territories. Abd ar Rehman established the Emirate of Cordoba and centralised authority in Moorish Spain, wresting himself free from the mainstream Muslim caliphate in Arabia.

The Moors were at the confluence of multiple cultures and religions. This led to the birth of a unique Moorish culture which embraced aspects of native Visigoth culture, North African culture, Arabic Muslim culture as well as elements of the Frankish culture to the north.

Such multitude of influences was reflected in the eclectic architecture and social life of the Moors. The Moorish culture in Spain also gave birth to the Islamic Renaissance which led to flurry of intellectual activity in the fields of sciences, literature and philosophy among others.

It was this Renaissance which revived interest in classical Greek and Roman literature, advanced on them with new and original insights and eventually contributed in kindling the European Renaissance.

End of Moorish Rule in Spain

These territories were taken over by the Christian kingdoms to the north one by one so that by the end of 15th century, the Emirate of Granada was the only remaining Moorish territory in Spain. Granada was lost to Spanish kingdom in 1492 and with this, the Moorish reign in Spain came to an end.

The Moors in Spain Interesting Facts: