“Prince” was a title used by different types of royal personnel in the medieval period. In medieval Germany, for instance, Prince was a title accorded to the most powerful barons, such as those in the Holy Roman Empire.

In most of the rest of Europe, Prince was the title given to the heir-incumbent expected to ascend the throne after the present monarch and was usually the eldest son of the present King. In both cases, the clothing of a prince was meant to denote his high social status well above the rest of the nobility. As a result, the clothing of a prince was far richer and well-embellished than other barons and noblemen but was less regal than the King himself. 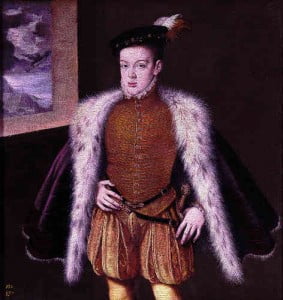 Lavish embellished tunics, cloaks, leggings and trousers were worn by the medieval prince

The actual clothing of a medieval prince usually depended on many circumstances, including the kingdom he belonged to and his actual status. A German prince, for instance, dressed significantly differently than a French prince. However, the most common items of a prince’s attire prevalent through most of medieval Europe included richly embellished cloaks and tunics, leggings and trousers.

The status of the prince was reflected in the degree of embellishments used on the cloak and tunic. Typically, the tunic of a prince carried gold lacework and rich embroidery. The cloak usually carried the coat of arms of the prince to clearly depict his elevated status.

Princes also wore belts to hold the trousers in place. On rare occasions, such as when a prince represented the realm at an official meeting, he would wear a specially designed coat made for the occasion. When holding his court, a prince would also wear a special surcoat which matched the colours of his coat of arms.

Shoes, although used since the early medieval period, had become very common and widely used by the late medieval period. By the 14th century, notable European princes such as those in the Holy Roman Empire were wearing elaborately constructed poulaine shoes with embellished decorations.

The shoes were typically made from premium-quality leather and then worked on by expert craftsmen to add comfort and style to their outlook. Head-dresses also became common among the princes towards the end of the High Middle Ages.

Head-gears typically included hats of different types which probably evolved from the military helmets. By 13th century, many European princes sported a head-gear of some kind. In the late Middle Ages, doublets became popular among European princes. Spanish princes, in particular, popularised the use of doublets across medieval Europe.

At the beginning of the medieval period, princes carried little to no distinction compared to the major noblemen through most of Europe. This was because royal authority still relied heavily on the military prowess of a ruler or a King and any incumbent prince had to display valour and military success before he was accorded a status above the powerful nobility. This changed towards the High Middle Ages and the later medieval period when long-established dynasties nominated princes well in advance. This led to specifically designated clothing for the princes.