Definition of a Medieval Prince

There can be various definitions for a medieval prince since the title has served to signify different roles and responsibilities throughout the medieval times. The word originated from the Latin word “princeps” which was used in the late Roman law to signify the ruler of a territory with complete or partial sovereignty. By the end of the medieval times, however, the title of medieval prince was mainly used for the rulers of relatively smaller and weaker territories.

What was a Medieval Prince Duties

The duties and responsibilities of a medieval prince varied depending on the usage of the title. If the title signified the ruler of a state, his foremost responsibility was to ensure the sovereignty of his state and the welfare of his people. When, on the other hand, the title of a medieval prince was used for the son of the king, his responsibilities were much less. Usually he could be given the charge of a certain area for which he would be responsible to the king. He could also be given an important post in the military. 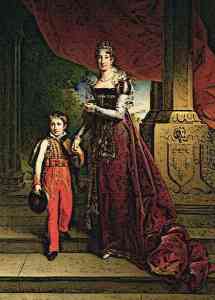 A Young Medieval Prince with a Duchess

Just like all other aspects of life, special attention was paid to the education of a medieval prince. From an early age, the medieval prince would start learning the manners and customs of being a royal person. After a certain age, his instruction in formal education would commence for which the services of a teacher could be hired. The medieval prince would also be educated in various martial arts and outdoor activities such as horse riding, hunting, and others.

The common accessories used in the dressing of a medieval prince included tunic, cloak, trousers, and leggings. Leggings were worn in pairs and acted as a protection for the legs. Usually belts were also worn at the hips to provide support to the trousers. In the official capacity, the medieval prince could also wear wrap-over coats which were decorated like chain-mail.

A prince would have many servants for example: