There was a considerable amount of difference between a medieval king’s clothing of different medieval periods. During the early medieval times, for instance, the medieval king’s clothing was relatively simple, although more elaborate and stylish to distinguish him from the common people. But during the late medieval times, common people could simply not wear certain colours and styles that were reserved for the kings clothing.

Western European kings admired the splendour of the Byzantine Empire’s clothing and copied many of its styles. Long under tunics made of silk and embroidered with gold thread were commonly worn by medieval kings, the colour purple was usually reserved for the clothing of kings and was a sign of prestige at this time. Long wide T-shaped tunics were often worn by medieval kings at coronations and important events where it was important to impress guests. 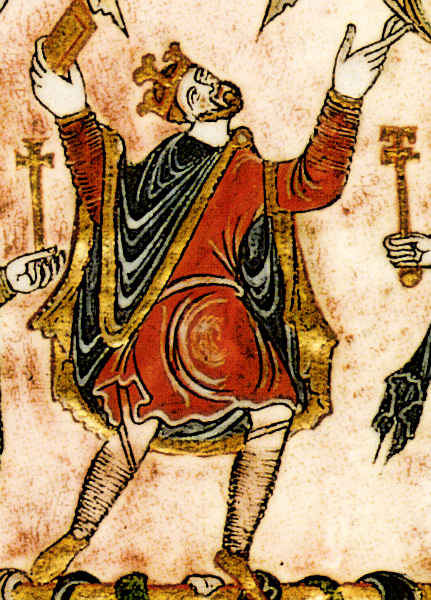 During the early medieval times, kings mostly used longer cloaks and leather tunics. Their shoes were also made of relatively poor quality leathers. However, the trend changed during the middle and late medieval ages and rich use of silk and fur became common. For instance, King Louis IX of France is described having worn a camel’s hair coat, black silk cloak, a hat trimmed with peacock’s feathers, along with a surcoat. Thus the medieval king’s clothing was much more decorated during the late medieval times.

Kings through the medieval period continued to wear Byzantine tunics and robes which were popular in early medieval times, in the early 1100’s it was popular for kings to wear long elaborate robes which were usually gathered up at the waist, the kings hands were covered up by the length of the cuffs. Queens wore robes that were made out of the finest furs and most splendid cloths. Headdresses that were combined with crowns or circlets were very popular royal clothing items during this period.

The Sumptuary Laws of 1463 clearly defined the restricted clothes and colours for the common people and maintained a strict difference between royal clothing and the clothing of the common people. These laws were mainly enacted to maintain the difference between medieval king’s clothing and the clothing of the middle classes since the  middle class could imitate nobility because of social pressures and increasing wealth. But lower classes were also restricted from wearing clothes imitating the nobility. 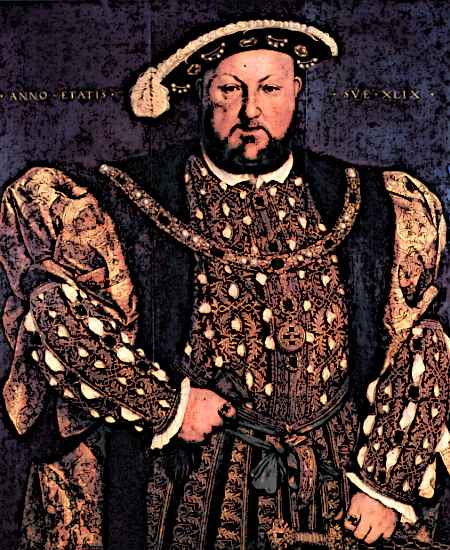 What did a Medieval King wear in Daily Life?

Since a medieval king had to attend his council and meet different people almost every day, his daily dress was quite elaborate and made rich use of silk, fur and even jewels. Common elements of medieval king’s clothing included the surcoat, belts of gold, long stockings or hose, and others. Even while hunting, he preferred to wear elaborate clothes of silk instead of practical hunting clothes.

Hunting and Battle Clothing of a King

The type of clothes worn by medieval rulers for hunting and battle were more practical than the ceremonial royal clothing that was often worn but could still be elaborate. Medieval kings were often in the saddle fighting battles or hunting on their lands, this made the usual ceremonial dress inappropriate and more practical royal clothing would be worn such as shorter cloaks, tunics, shirts and mail.

It was common for a medieval king to wear elaborate surcoats during different ceremonies and while holding court. The elaborate dress was, of course, accompanied by the kings crown which was richly adorned with jewels. The Kings dress was often embroidered with gold and the girdle also made rich use of precious stones and ornaments. Materials like silk and fur had become a status symbol by the late medieval times and thus became important components of medieval king’s clothing.

Medieval kings showed their status and wealth to other medieval people through the emblems and patterns on the kings clothing. Kings wore regalia (Royal things) that they often carried or wore in daily life or at special ceremonies.

Medieval kings would often wear long expensive robes with other other regalia like:

The important regalia worn by medieval rulers showed the wealth and status of these medieval kings, however the ultimate piece of a kings clothing would be the medieval crown. The medieval crown would be worn at special occasions such as coronations with the full royal costume. 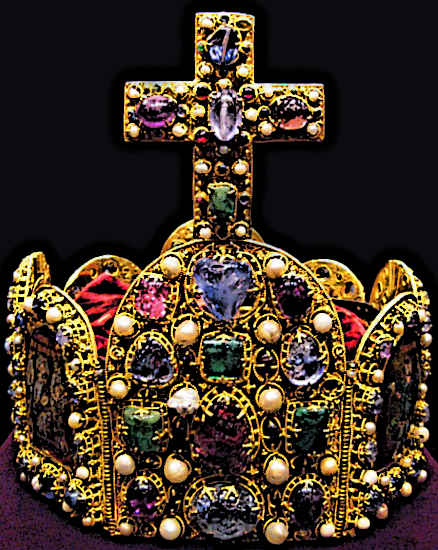 Fashion during the medieval times was heavily influenced by the styles of medieval king’s clothing or that of the queen. The medieval fashion styles drastically changed from 1100AD onwards because of the increasing trade and contact with the rest of the world and increasing wealth. Thus a medieval king’s clothing had more elaborate styles from this time onwards and these styles were also reflected in the clothes of other people.