A number of Medieval legends and myths were popular during the Middle Ages.

These featured fictional and often legendary figures with a lasting appeal and character.

Here is a look at some of the most notable medieval legends and myths of Medieval Europe and well-known mythical people from medieval tales and legends.

Earlier accounts like Acts of Thomas and those by westerner travelers believed that Prester resided in India.

After the Mongols reached the Western world, Prester was imagined to reside in Central Asia and later accounts confirmed him in Ethiopia.

His legend and tales had affected European history by encouraging explorers, hunters and missionaries.

Robin Hood was a legendary character found in English folklore, literature and film.

These legends depicted him as an archer and swordsman from a noble background.

Various characters were also associated with Robin Hood and it is said that he robbed from the rich and gave it to the poor.

In the late middle ages, he became a popular folk figure and ballads began featuring him in 15th century.

His tales are considered among the best tales of English literature. 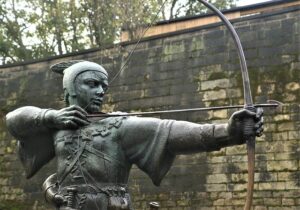 In the middle ages, Pope Joan was a legendary woman who reigned as Pope for several years.

Her character gained popularity in the 13th century literature and spread throughout Europe.

Her story was believed to be true for centuries while other accounts considered it fictional.

The stories described her as a talented woman who disguised herself as a man.

Due to her talents and abilities, she rose through the hierarchy and became pope.

Her gender was revealed when she gave birth during a procession.

She later died due to natural causes or was murdered. After her death, church processions avoided this spot and made sure that all future popes were male.

According to medieval histories, King Arthur was the legendary king of Britain who fought against Saxon invaders in 5th and early 6th centuries.

His historical background is found in various sources such as Annales Cambriae, the writings of Gildas and Historia Brittonum.

He is associated with the matter of Britain and his character gained popularity from Geoffrey of Monmouth’s account of British history titled “Historia Regum Britanniae".

He depicted Arthur as a great king who fought Saxons and built a vast empire. He fought his final battle against Mordred and was laid to final rest in Avalon. 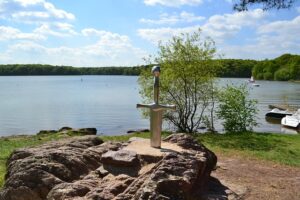 According to legends, William Tell was an experienced marksman. He reputedly assassinated Albrecht Gesser with a crossbow. Gesser was a nobleman whose brutal rule led to rebellion and later gradual independence of Swiss confederacy.

William Tell is a folk hero of Switzerland who encouraged the population to open rebellion against the cruelty of Albrecht Gesser.

He was an important symbol in the formation of modern Switzerland who led to a period of restoration and regeneration.

His first reference was found in the White Book of Sarnen compiled in 15th century by Hans Schriber.

Lange Wapper was a legendary character found in the Flemish tales that were popular in the city of Antwerp and the surrounding regions in the Middle Ages.

His legend started in the 16th century when a farmer found a garden parsley and red cabbage in his bed. Upon touching the vegetables, they turned into a cute baby.

This baby was adopted by a family in Antwerp. Many years later, the boy helped people in need and one day he saved a woman who was thrown into the river Scheldt.

The woman gave him the gifts to make himself so tall that he could move from one town to another in one giant step.

Due to his tall size, he was given a name of Lange Wapper. Many legends on the theme of Wapper became popular in Flemish cities.

Amleth was a Scandinavian legendary medieval character who was the direct predecessor of the character of prince Hamlet, the hero of William Shakespeare’s tragedy “Hamlet".

The accounts about the legend of Amleth are found in the book of Saxo Grammaticus which was completed at the beginning of 13th century.

Various stories about Amleth showed that he was the son of Horvendill, king of Jutes.

Horvendill was killed by his brother Feng. Feng dispatched Amleth to Britain with two attendants who carried a letter for the king of the country to put him to death.

Amleth secretly altered the message and wrote to give Amleth his daughter in marriage. After the marriage, he returned to Denmark and slew Feng with his own sword.

Corineus was a legendary British warrior, a fighter of giants and the legendary founder of Cornwall.

According to Geoffrey of Monmouth’s History of the king of Britain, Corineus led the descendants of Trojans after the Trojan War.

In Gaul, Corineus declared a war with the king of Aquitania by hunting in his forests and killing his people single handedly with his axe.

He crossed the island of Albion and settled in Cornwall which was inhabited by giants.

Corineus defeated the giants but kept their leader, Gagmagog, alive for a wrestling match between the two.

The match took place near Plymouth where Corineus defeated the giant and killed him by tossing him over the cliff.

Hildebrand was a legendary Germanic character who was associated with the cycle of the legends about Theodoric the Great.

Hildebrand appears in many fictional works and played a supporting role in various poems of Dietrich cycle.

ccording to Nibelungenlied, an epic poem written around 1200 in Middle High German, he was the companion of Dietrich Von Bern who was the ruler from Verona.

He fought his own son Hadubrand who had been in exile in Dietrich.

The poem ended before a conclusion. According to Scandinavian song ‘Hildebrand’s Death’, he fought against his half brother and was wounded fatally. He then asked his brother to bury him properly.

Galahad was an important knight of King Arthur’s Round table and one of the achievers of Holy Grail in Arthurian legend.

He was an illegitimate son of Sir Lancelot and Elaine of Corbenic.

He was known for his piety and purity as the most perfect of all knights.

He first appeared in the Lancelot-Grail cycle and his story appeared relatively late in the Arthurian legend.

He was given the seat at the ‘Siege Perilous’, an unused chair which was kept for the one who succeeded in the quest of the Holy Grail.

Galahad survived this test upon which Arthur proclaimed him the greatest knight ever. 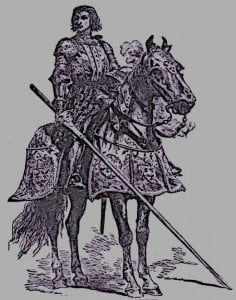