Normans were descendants of Vikings who had settled in northern France during the 10th century. The area they resided in eventually came to be called Normandy. Being formidable warriors, the Normans were ranging out of France and into southern Italy, Sicily, North Africa, British Isles and the Byzantine Empire by the 11th century.

Initially serving as mercenaries for many contemporary European kingdoms and Empires, they went on to forge a number of their own kingdoms. In doing this, Norman culture of warfare and their military innovations played a key role. Notable among these innovations was a kite-like shield which came to be identified with the Normans and was popularised by them throughout Western Europe.

The round shield was the hallmark of the Vikings and being the descendants of the Vikings, Normans actively used such shields in their early warfare. Unlike the kite shields which remained popular with Norman cavalry, round shields were more common with the Norman infantry troops. Norman round shields were typically made from wooden planks glued together so that they form a circular structure 30 to 40 inches in diameter.

Most round shields had a rim around the perimeter, reinforcing their basic wood structure. Leather was also frequently used over the wood to make the shields more durable and less prone to damage. At the exterior of the round shields, a cone shape iron boss was commonly used in Norman designs. Some round shield also carried iron braces but a flexible strap was more commonly used. Normans painted their round shields with different bright colours, often depicting the mythical Norse beasts on the shields. 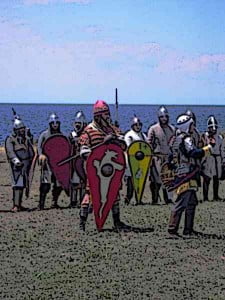 Norman Shields Infantry with Kite Shields – The kite shield, as the name suggests, was often made in the shape of a kite or an almond, with a flat or tapered top respectively.

The Kite shield was the most popular type of shield used by the Normans on the battlefield. Norman Shields Infantry with Kite Shields This is directly attested by the famous Bayeux Tapestry where Norman soldiers are depicted wielding sizable kite shields. The kite shield, as the name suggests, was often made in the shape of a kite or an almond, with a flat or tapered top respectively.

Such a shield had many vital advantages compared to the more traditional circular shield. A key advantage of a kite shield was that it was long enough to cover the lower body of the knight as well, securing his body from shoulders to the calf from potential injuries. Although large in size, the shield was still light enough to be easily wielded by cavalrymen and was usually carried on the left arm as the cavalrymen carried their primary weapons on the right.

Normans were the first to popularise the use of kite shields and extant examples of such shields vividly depict the Norman design and aesthetic in the making of these shields. For instance, some Norman kite shields carried a wavy “X” pattern, usually denoting that these belonged to the Huscarls, a specific class of the Norman society.

Other shields were painted with crosses, triangles in different colours as well as different mythical beasts. Portions of the Bayeux Tapestry also suggest that the Normans may have used smaller kite shields.