The use of shields in medieval Europe was inherited from the legacy of the Roman Empire where the soldiers used a wide variety of shields. The type and design of shields in Europe evolved significantly over the course of the medieval period, as battlefield weapons and military culture evolved.

Early medieval shields in Europe were round-shaped and were usually constructed from wood with leather reinforcements. Over time, as knights became the most important military body on the battlefield, shields with more elaborate designs came into use featuring a construction from sturdier materials. Following are some of the most common types of shields used by medieval knights.

The kite shield was one of the earliest advancements over the simple round shield. The kite shield, as the name suggests, had a kite-like design and was constructed either in the shape of a wide teardrop or a flat-topped design.

Norman knights were among the first to use this type of shield and popularised it through Western Europe from the 10th century onwards. One of the vital advantages of a kite shield was that although it was only slightly heavier than a round shield, it effectively protected one complete flank of a knight as he fought on the battlefield.

This effectively guarded the knight from any lower body wounds he could otherwise sustain. The shield remained popular among European knights until the 13th century. 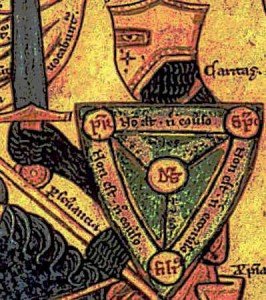 The heater shield was a type of shield that gained popularity among medieval knights towards the late 12th century.

The heater shield was a type of shield that gained popularity among medieval knights towards the late 12th century. This type of shield was typically small in size, essentially a trimmed version of the kite shield.

The small size of the shield made it easier to wield it speedily on the battlefield during combat and to carry it with no discomfort. The use of the heater shield became widespread at a time when body armour became more prevalent in Europe and there was little need to carry a long shield to guard the lower body.

Another advantage of the heater shield was its inexpensive yet sturdy construction, the typical design comprising of wooden construction overlaid with leather.

Bouche was a specialised type of shield which became popular among European knights towards the late medieval period. The shield itself had little to no value on an actual battlefield.

It was rather popularly used by the knights in jousting contests during knightly tournaments. The defining characteristic of such a shield was a lance rest in the upper corner of the shield, allowing a knight to fix his lance into the corner of the shield and aim it with a steady posture at the approaching opponent.

Bouche shields remained popular until the culture of knightly tournaments came to an end in medieval Europe.

Knightly shields in the High Middle Ages evolved primarily in view of the fact that the knights had become the most important military body in battlefield combat.

Towards the late medieval period, plate armour became more readily available and the significant of knights declined as infantry became as formidable a part of an army.

These changes were reflected in the shields used by the knights which reached the peak of their structural innovation in the 10th to 12th centuries and began to decline in use and design afterwards.