Many different types of swords were used in warfare during the medieval period. These ranged from broad-bladed single-edged and double-edged swords to thinner swords with a tilted curvature.

Among the types of swords used in the medieval period were broadsword, arming sword, falchion, longsword, rapier, sabre and shortsword among others.

Swords were typically used occasionally and that only when the mounted cavalry had to engage in close combat or on such rare cases when the infantry used swords as a primary weapon.

In most cases, a sword served as a reserve weapon while another weapon such as a spear or an Axe was used as a primary weapon.

The most common and popular type of sword used in the medieval period was the one wielded by European knights. This type of sword was typically straight and double-edged. The average length of the blade of a knightly sword ranged from 28 to 31 inches.

The knightly sword came into being sometime around the 11th century, evolving from the Norman swords used by the Viking descendants in the 10th century. Such a sword was meant to be wielded with a single hand so that the knight’s other hand was free to hold up a shield. The knightly sword declined in use towards the late medieval period when longsword became more popular. 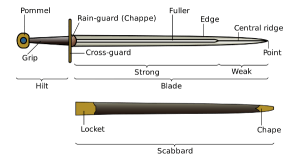 The image shows the parts of a typical medieval sword such as the Pommel, Grip, Rain Guard, Cross Guard, Fuller, Edge, Central Ridge and Point

A falchion is a type of medieval sword that was used in different parts of Europe from 13th to 16th centuries. Falchions were single-edged swords which were designed to enable single-handed use. The falchion was similar in design to the shamshir sword used by the medieval Persians.

Extant specimens of medieval falchions suggest that although it was commonly used by the peasants, falchions were also used by members of the nobility. However, compared to other types of medieval swords, the use of falchion was not very widespread.

The Rapier is a type of sword which came into common use during the final decades of medieval period. This type of sword comprises of a thin blade with a sharp point which is then most commonly used for thrusting.

Rapiers have also been historically used for cutting and slashing an opponent. Although some preliminary models of rapier were used on the battlefield, this type of sword was popularly used for civilian combat and dueling during the late medieval period.