Gawain Knight of the Round Table

Sir Gawain was King Arthur’s nephew and most of the Arthurian literature portrays him as a formidable but compassionate knight who is well-versed in the art of healing with the use of different herbs. Many stories also associated him closely with the Sun so that his strength waxed and waned as the Sun rose and set.

Although many notable knights from King Arthur’s legends are known for their chivalric qualities, none of them surpasses Sir Gawain in terms of courtesy and compassion. He is variously portrayed in different stories as the very person who would defend the weak against the cruel and come to aid of women, maidens and anyone in need for help.

He is also depicted as a very courteous knight, surpassing all other Knights of the Round Table in this particular quality. He is also considered the arch-model of chivalry as was expected of the Arthurian knights. 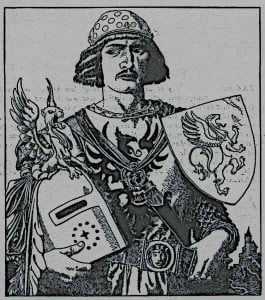 Sir Gawain was directly related to King Arthur which further added to his prestige at the King’s court.

Sir Gawain was directly related to King Arthur which further added to his prestige at the King’s court. According to early Arthurian stories, he was the nephew of the King, being the son of King Arthur’s sister Morgause. His father was King Lot of Orkney and among his brothers were Gareth, Gaheris and Mordred.

Mordred, Sir Gawain’s brother according to the legends, was also the one who later fought against King Arthur and brought about the end of his reign. Legends state that Mordred had not tried to usurp the reign, Sir Gawain was the rightful heir to it after King Arthur.

Most of the characters and stories contained in Arthurian legends have been derived from different Welsh traditions, according to modern historical scholarship. A parallel to the character of Gawain is found in the Welsh stories in the guise of Gwalchmei. Gwalchmei is mentioned in association with King Arthur in a few early stories.

Other sources mention him as a man of extraordinary hospitality and bravery, and portray him one of the most fearless knight warriors under King Arthur. Like many later Arthurian stories, the Welsh traditions also trace his lineage back to Arthur’s sister, making him of royal blood.

Gawain, as one of the most notable and prestigious knights of King Arthur, was a close friend of Sir Lancelot who was also among the most prominent Knights of the Round Table. The two often undertook adventures together and in many cases, Gawain intervened to save Lancelot from his rash decisions.

When it was discovered that Sir Lancelot had an affair with King Arthur’s wife, the Queen Guinevere, Sir Gawain’s brothers decided to inform the King about it. Gawain tried to stop them but failed. When King Arthur, upon hearing of the affair, decreed that Guinevere should be burnt at stake and be guarded while this punishment was carried out, Gawain refused to be a part of it out of indignation. However, when Lancelot came to rescue of the Queen and killed two of Gawain’s brothers in doing so, Gawain forgot his friendship with Lancelot and instigated the King to go to battle with him. 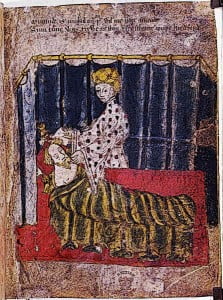 Among the famous Knights of the Round Table, Sir Gawain had a special position. He was King Arthur’s nephew and was considered one of the bravest and most chivalrous knights of the King’s court.

Gawain and the battle with Mordred

Mordred, King Arthur’s adopted son, was a brother of Gawain’s. Gawain was supposed to be the rightful heir of the throne after King Arthur. When Lancelot rescued Guinevere, King Arthur led an expedition against him on the advice of Gawain. But while the King was away, Mordred usurped the throne and married Guinevere.

King Arthur and Gawain returned back to the Kingdom in order to fight and defeat Mordred. In the ensuing battle, Mordred, King Arthur and Gawain, all three fell. Before succumbing to his wounds, Sir Gawain wrote to Lancelot, resuming his friendship and requesting him return to Britain.

Gawain and the Sun

In many Arthurian tales related to Sir Gawain, he is associated with the Sun. Some of these stories portray him such that the Sun has a supernatural effect on him: when the Sun is at its peak, at noon, Sir Gawain reaches the peak of his strength; but when it begins to decline, Gawain’s strength begins to wane until it’s completely gone by the evening.

Some modern scholars argue that parallels for this peculiar trait are found in the mythical heroes of Welsh legends as well, some of them associated with a pagan notion of the Sun so that the Sun is a god which grants special powers on these heroes. There is a possibility that like the character of Gawain himself, his unique characteristics were also borrowed from the Welsh legends.

Gawain and the Roman Empire

According to early stories about Gawain, he was engaged as a knight at the Imperial house of the Roman Emperor. At this time, he was known as the Knight of the Surcoat because he wore a tunic over his armour. While at the Roman court, Gawain made a reputation for fearlessness and won many famous combats.

Notable among these was his fight against the Pirate King, Milocrates, and his successful defeat of the Persian champion, Gormundus. After Rome enjoyed continuous peace for some time, Gawain grew bored and sailed for Britain where he eventually joined King Arthur’s Round Table.

Among the famous Knights of the Round Table, Sir Gawain had a special position. He was King Arthur’s nephew and was considered one of the bravest and most chivalrous knights of the King’s court. Gawain was initially engaged at the Roman imperial court where he made his name as a fearless warrior and a knight.