Many large Medieval churches in Europe were once cathedrals. For a medieval church to become a cathedral it had to house a bishops and acted as their headquarters, for this reason medieval cathedrals tended to be large and grand in design to show off the status of the Catholic Church in medieval society. A number of Medieval cathedrals were known for their size, grand architecture, and stained glass windows that often depicted the life of Christ and certain other saints and religious icons.

Definition of a Medieval Cathedral

Medieval cathedrals were churches that housed bishops and served as their headquarters. A church may be bigger than a cathedral but if no bishop had taken up residence there then it would not enjoy the same status as a cathedral. The French church of Laon used to be a cathedral until it lost its resident bishop. When it was downgraded to a church, the population of the surrounding town dropped. Many other churches were in the same boat. Though much bigger and architecturally grander, the absence of a bishop prevented them from turning into cathedrals. In the hierarchy of holy structures, cathedrals were more influential than churches, size-regardless. 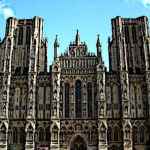 The stunning exterior of Wells Medieval Cathedral in the UK

Timeline and History of Medieval Cathedrals

Before cathedrals emerged across Europe, predictions about the end of the world stirred fear in the hearts of men. But the year 1000 pressed on. Cathedrals became everyone’s saving grace and constructing them ultimately allayed fears of extinction. In the span of almost four centuries, 500 cathedrals were built in France. For every 200 people, there was a cathedral or church in place. Building cathedrals cost more stones than building the pyramids of Egypt.

Medieval cathedrals underwent several transformations throughout the centuries. The earliest types of cathedrals adopted the Romanesque architecture. In other words, most of these holy structures were designed similar to Roman basilicas and other Roman buildings. Characterized by solidity and heavy foundations with large columns and vaults for example, Romanesque Medieval cathedrals had a limited number of windows, resulting in a dark and gloomy interior.

Walls were typically adorned with bright tapestries and bejewelled statues and chalices but these did little to brighten up the sun-deprived interiors. A typical Romanesque Medieval cathedral would have a central aisle, flanked at the sides by a north arm and a south arm of transept, with a crossing up ahead. From a bird’s eye-view, these spaces form a cross. The large nave, the tower and the porch completed the whole Romanesque look. 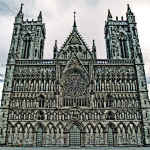 A new architectural design emerged in the mid-12th century, which came to be known as Gothic – a more euphemistic term for the word “barbarian." Refined citizens used the term to describe cathedrals existing during the High Medieval times. Most of the surviving cathedrals that have remained standing at present are products of Gothic architecture. Gothic Medieval cathedrals were different from their Romanesque counterparts. They had thinner walls and were made from lighter materials. They were characterized by rose windows (usually placed at the centre of the structure). Large cathedrals can accommodate a minimum of two towers, divided at the centre by a crocket and gable.

Beneath the towers, practically surrounding the structure, were small elongated openings called arcades. Arched windows, sharp pinnacles and flying buttresses that supported the thin walls gave Medieval cathedrals a soaring appearance. According to some sources, the pointy elements – a style benchmarked from Arabian edifices – were deliberately incorporated to ward off demons seeking to hide in the cathedral. Stained glass windows were not installed until the twelfth century. They helped illuminate the interiors of Gothic worship centres, adding a touch of colour to the limited light that seeped in.

The Gothic style continued to flourished until the late Medieval era but certain features were tempered down. A new form of Gothic architecture, called Perpendicular, became widespread and replaced the Norman, English Gothic and Decorated Gothic architectures of the High Medieval times. This design was more minimalist, defined by fluidity, multiplicity and a lack of ornamentation. The arches became less pointed and openings were not so narrow anymore. 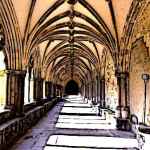 The best of English Gothic architecture can be seen through the famous Westminster Abbey and the Canterbury Cathedral. Both structures sported pointy pinnacles, Gothic arches and flying buttresses. Though the interiors were somewhat Romanesque, the high towers, the vaulting ribs, the large circular rose windows and the stone pillars (piers) made the Gothic features stand out. Situated in the quiet little town of Chartres, just a few kilometres from Paris, the Chartres Cathedral was the perfect example of French High Gothic architecture. Nearly as untouched as the day it was constructed, a number of the cathedral’s stained glass windows have survived the centuries. There were but minor changers since the 1200s.

The Cathedral of Saint Mary of the See or widely known as the Seville Cathedral, constructed on the site where the Almohad Mosque used to be, was famous for showcasing the wealth and influence of its city. It took centuries to build the cathedral and by the time it was completed, it dethroned Turkey’s Hagia Sophia as the biggest cathedral in the world. Although the majority of the design was Gothic, some of its columns and a few other elements were taken from the Almohad Mosque. The cathedral’s bell tower, fondly called the Giralda, was originally a minaret.

Another noteworthy cathedral is the Worcester Cathedral, built around 1084 to 1504. What made this structure different from the rest is that it was able to apply a wide range of Gothic elements from Norman to Perpendicular. The crypt and the circular chapter house were Norman in nature while the well-proportioned central tower, the fine woodwork and the transitional Gothic bays were reminiscent of the Perpendicular style.

Medieval cathedrals that have survived the ages set a good example for many architects and present-day structures. They’re laudable mainly because they show to the world the importance of architecture and what it really means to build one. Medieval cathedrals give today’s society a glimpse of the culture of the people responsible for their creation.