Definition of a Buckler Shield How was a Buckler Shield Used

The primary purpose of the buckler shield was to protect the sword hand and thus it was an ideal shield for the swordsmen. Since it was lightweight, the swordsman could handle it easily while engaging in fight with the other hand. Another advantage that the swordsman could have with buckler was that it could be used in grappling where the opponent’s arm could be wrapped up and bounded.

The Buckler shield was among those medieval shields which were ideal for the swordsmen. Thus was it a weapon of defence for the common soldiers indulging in hand-to-hand combat with swords. It was specifically designed to deflect the attacking blades. 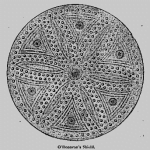 Buckler shield was one of the most common medieval shields and was specifically useful for swordsmen because of its lightweight structure. It was designed to deflect the attacking blades and could be easily controlled. Its primary shape was round although it could also be found in rectangular form.

Please see the links at the bottom of this Buckler Shield page that take you to other medieval shields pages such as the pravise shield and the Kite shield, learn how these medieval shields differed from the Buckler shield.